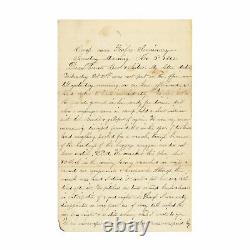 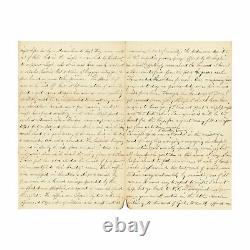 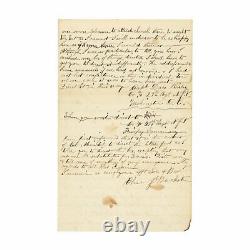 Baxter of the 27th New Jersey wrote this letter to his family at home on November 2, 1862, while the regiment was encamped at the Fairfax Episcopal Seminary in Virginia (today known as the Virginia Theological Seminary). In the letter he discusses the regiments march to the Seminary, finding valuable items in another regiments camp, and a detailed account of a soldier funeral he attended. Baxters regiment had enlisted back in September for nine months service and up to this time had been on garrison duty in the defenses of Washington. At the beginning of the letter, Baxter writes that just one hour after mailing his previous letter. We hard orders to leave immediately. We were out on the parade ground, in line, ready for division drill when a messenger came in camp, held a short interview with Col. Mindil, & galloped off again. We were very unceremoniously dismissed from drill & in the space of two hours had everything packed for a march. The regiment reached the Seminary, he writes, having marched six miles & carried our equipment & knapsacks. He adds that although the march was hard I stood it well & felt but very little tired after it.

We are encamped on ground that was occupied night before last by a Massachusetts Regt. They were rousted out of their bed in the night & marched to the front to support Sigel, who it is said had nearly met with a repulse, having lost a train of baggage wagons & four hundred men taken prisoner. Its unclear exactly what engagement Baxter refers to here, but it is possibly the October 31 skirmish at Mountville, where rebel cavalry under J.

Stuart surprised a contingent of the 1st Rhode Island Cavalry, capturing over forty men. In the immediate aftermath, however, the captured were thought to number much greater. The Mass Regt was so hurried off that it left some articles of value. We found a good many stragglers here when we came picking up all they could find.

One remarked to me Young man you should have hurried up & you (meaning our Regt) might have found something worthwhile. Found an excellent Minnie rifle. Baxter next describes the area around the Seminary.

Fairfax Seminary (now a hospital) is forty or fifty rods from here. It is a splendid building much ahead of a great many of the same kind in the North & accommodates 1200 sick & wounded. The hospital burying ground is close by the side of our camp. It is dotted over with white slabs which mark the resting places of the brave. He closes the letter with a detailed account of a funeral for four soldiers.

I have just been out & attended the burial of four poor fellows, martyrs to their Countrys cause. Each coffin was wrapped in the stars & stripes & carried by four men on a hand carriage proceeded by the muffled drum, Chaplain, & a squad of men who fired the salute. The coffins were followed by two or three officers & a number of soldiers who werent mourners, but out of curiosity.

The bodies were deposited in their respective graces, prayer offered by the chaplain (in which he affectingly remembered the bereaved at home) & three salutes fired from the fort of each. Thus ended the soldiers funeral. The letter was written on four pages of a 5 x 8 letter sheet. Very good condition with light foxing and toning.

Creased at the original folds. The full transcript is found below. Sunday Morning Nov 2 1862.

Dear Parents, Bros, & Sisters. My letter dater yesterday Oct 19th was not put in the office until yesterday morning. In one hour afterward we hard orders to leave immediately.

We were very unceremoniously dismissed from drill & in the space of two hours had everything packed for a march, though because of the tardiness of the baggage wagons we did not leave until 3 P. We reached this place about 1 oclock in the evening, having marched six miles & carried our equipment & knapsacks. Although the march was hard I stood it well & felt but very little tired after it.

We pitched our tents, gathered brush & leaves in anticipation of a good nights rest. Though I was sadly disappointed on my part one of my teeth ached the live long night & is still aching while I write to you.

Our company has gone out today on picket duty some five or six miles from here. Through the kindness of Dan I got excused from going, though I should have been anxious to have gone if I had not spent a sleepless night with the toothache. Tonight finds me not seated in the midst of a crowd of merry boys, singing & engaging in cheerful conversation (as I usually spend my evenings), but all alone. Such quietude as this seems strange. A circle of knapsacks lays around the tent, each of which serves to drive away melancholy by reminding me of its owner.

It seems easy to reflect tonight. I cannot help but go back to N.

I presume you are all seated in the little church listening to the word of God. It would afford me some pleasure to attend church there tonight too, but as I cannot I will endeavor to be as happy here as I would there. Although I was so particular to tell you how I wished my box of things directed I shall have to get you to direct it differently. The address would have answered if we had not moved & I had not lost confidence in the individual to whose care it was to have been sent. Direct it in this way.

Mindil to direct the letters just as I told you to direct the box, excepting that my name be substituted for Dans. Write soon & tell me of everything of any consequence. My regards to all that inquire.

I remain as ever your aft. Please see my other items for more interesting Civil War letters, documents, and images. The item "1862 Civil War Letter 27th New Jersey Soldier Funeral at Fairfax Seminary" is in sale since Saturday, November 27, 2021. This item is in the category "Collectibles\Militaria\Civil War (1861-65)\Original Period Items\Correspondence, Mail". The seller is "iron-horse-sales" and is located in Champaign, Illinois.