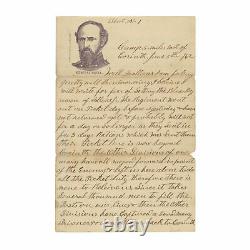 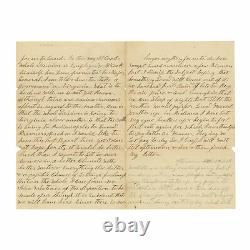 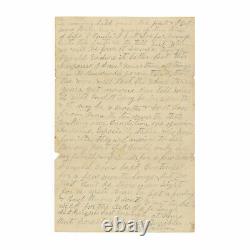 This June 1862 letter, written on patriotic stationery featuring the bust of Union General Don Carlos Buell, was written by one of Buell's men in the 30th Indiana. In it the author discusses picket duty and guarding prisoners at Corinth, rumors of General McCook's promotion, and anxiousness over when the war will finally end. While other Federal divisions were advancing following the capture of Corinth, Mississippi, Union General Alexander M. McCook's division, of which the 30th was a part, remained near Corinth to guard prisoners and the army's line of supply.

The author was weary of picket duty, noting that it takes several thousand men to fill the posts on our lines. " General McCook, he'd heard, had been assigned a command in Virginia, and another rumor circling the camps "is that the whole Division is going to Virginia also. The rumor he most hoped was true, however, concerned the 30th returning to Indiana to guard prisoners there. "Much as I would like to have this last report true, yet I dare not hope for it, " he wrote, adding, it would be better luck than I expect to get so near home.... Picking up the pen later in the afternoon, the author continued the letter in order to drive off the blues. " He was plagued by uncertainty, arguing on one hand that "no reasonable person thinks that the war will last the whole three years of his enlistment. However, on the other hand he noted that nobody knew when it would end--it may be in 2 months & it may be 6 months & so it goes from month to month, thus making our condition one of anxious suspense.... He felt that getting a furlough home for a few weeks would help lift his spirits, but believed that the only likelihood of that happening was if he was sick. There is no sight for a well man to get a furlough & God knows I don't want to be sick for the sake of a furlough. Sickness is bad enough at home, but here it is absolutely terrible.

The letter abruptly ends there, where it is signed James Ballison. This name doesn't appear on the 30th Indiana roster.

I believe this is actually only the first sheet of a multi-sheet letter, given the abrupt closing and the Sheet No. 1 written at the very top of page 1. The letter measures about 5 1/4" x 8" and is in good condition with light toning. It is delicate at the mailing folds and the centerfold has been reinforced with archival document tape. Camp 5 miles east of Corinth.

Their picket line is now beyond Corinth. The other Divisions of our army have all moved forward in pursuit of the enemy & left us here alone to do all the picket duty, therefore there is none to relieve us since it takes several thousand men to fill the posts on our lines. & then the other Divisions have captured a good many prisoners & sent them back to Corinth for us to guard. What is to be done with us is not yet known, although there are various rumors afloat in regard to the matter. One is that the whole Division is going to Virginia also, & another is that the 30th is going to Indianapolis to guard prisoners.

Much as I would like to have this last report true, yet I dare not hope for it. It would be better luck than I expect to get so near home & in a better climate with better water & everything else better & a possible chance of getting a furlough.

But on the whole I can form no idea whatever of the disposition to be made of us, though it is evident that we will leave here since there is no longer anything for us to do here except guard ourselves & a few prisoners. But I dismiss the subject hoping that something good will come out of it. We have had just rain enough of late to keep the air pure & cool enough so that we can sleep of nights. But still the weather would pass for good harvest weather up in Indiana. They say we get pay today, so I guess I will wait till afternoon & see & then finish my letter.

O could I but see far into the future to tell just when we will be free. It seems as though I could endure it better, but this suspense I dread worse than all things else. No reasonable person thinks that the war will last the whole three years, yet no one can tell when it will end. It may be in 2 months & it may be 6 months & so it goes from month to month, thus making our condition one of anxious suspense, especially those who have families they are anxious to see.