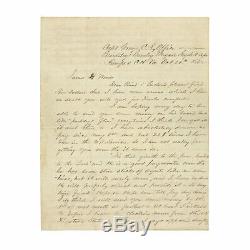 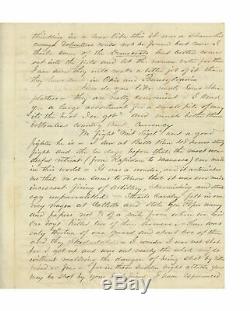 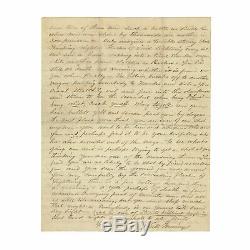 In this October 1862 letter, J. Sell Jennings writes to his friend about life in the 11th Corps and JEB Stuart's August raid at Catlett Station. Jennings had enlisted as the company clerk for Dilger's Battery I, 1st Ohio Light Artillery, although he writes this letter from Beardsley's Cavalry Brigade, which was then attached to the 11th Corps. It's unclear if Jennings was serving on staff or was still with Dilger's Battery. " Turning his attention to the draft, Jennings writes "I have always opposed drafting, thinking in a war like this it was a shame that enough Volunteers could not be found, but now I think some of the Democrats had better come out into the field and let the women vote for them.

The final portion of the letter is a lengthy passage in which Jennings describes his faith in 11th Corps commander Major General Franz Sigel and the fear he felt when JEB Stuart's troopers attacked the well-supplied Union camp at Catlett's Station. Though lengthy, it's included here for its rich details. We fight "Mit Sigel" and a good fighter he is. I saw at Bulls Run 48 hours steady fight and the ten days before that the most wonderful retreat (from Rapidan to Manassas) ever made in this world. It was a wonder, and it astonishes me that no one seems to know that it was ever made.

Incessant firing of artillery, skirmishing, and strategy unparalleled. Stuart's Cavalry fell in our very wagon at Catletts and stole Gen. Our boys killed two of them. There was only thirteen of our guard and about 600 of them and they Skedaddled.

I wonder I was not shot for I got up and was out nearly the whole night without realizing the danger of being shot by either friend or foe, for in those sudden night attacks you may be shot by your best friend. I have experienced now two of them and such a battle as Bulls Run, where men are slain by thousands, are nothing in comparison. Only imagine a terrible stormy black thundering night. Flashes of vivid lightning every second and a hand reaching into a tired traveler's wagon while another hand clutches a revolver.

You lie still as death not knowing whether is friend or foe, when finally the villain sneaks off to another wagon hunting somebody to murder and rob. You crawl stealthily out and peer into the darkness and storm to see the scoundrel when bang Whew! --bang whist, crack ye-u-ehh, wang tsyell, and you hear bullets yell and scream past you by dozens. The next flash you think you are sure of one shot any way--you want to be sure and whisper "who are you" and perhaps you find it to be your bedfellow, who has also crawled out of the wagon to see whats going on and is perhaps trying to get a shot at you thinking you are one of the murdering thieves.

You find you are as likely to be shot by friend as well as foe and you scan the ground for rods around you very carefully by the succeeding flashes of lightning. There is a few volleys here and there, a moaning, a yell perhaps of death, a few groans, a hurrying past of mounted men and all is still till morning. But you don't sleep much that night. Everybody is on guard until broad daylight.

Such is one of Stuart's brilliant surprises. The letter was written on three pages of a four-page bifolum stationery sheet measuring about 7 3/4" x 9 3/4". It is in excellent condition with light foxing and toning.

Beardsley's Cavalry Brigade, Sigel's 11 Corp. Dear Friend: Enclosed please find four dollars that I have come across which I have no doubt you will need for Frank's comfort. "He that giveth to the poor lendeth to the Lord" and He is a good paymaster even though he has some slim sticks of agents like my sometime, but it will surely come, and He will properly direct and provide it. So, my kind friend, Hope on Hope ever til pay day comes. At least I intended to before I heard the election news from the old Keystone State. I have always opposed drafting, thinking in a war like this it was a shame that enough Volunteers could not be found, but now I think some of the Democrats had better come out into the field and let the women vote for them.

How do you like Uncle Sam's Shin-plasters. "It's the best I got" and much better than bottomless country bank currency.