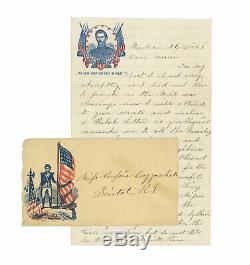 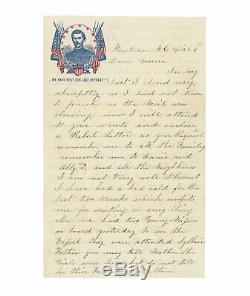 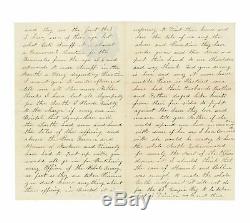 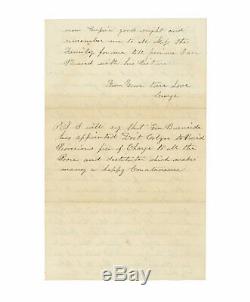 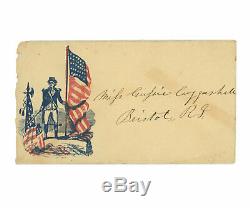 An interesting letter date April 9, without a year, but from context it is determined to be from 1862. In it, the author writes a lengthy rant against the Rebels, holding them responsible for deprivations against North Carolina unionists and desecrating the grave of Major Sullivan Ballou of the 2nd Rhode Island , who was killed at First Bull Run. He was likely a member of the 4th or 5th Rhode Island Infantry.

We had two Young Misses onboard yesterday to see the Vessel, he wrote, adding that they are the first that I have seen of their age but what eats snuff. It is almost a universal practice for the females from the age of 6 and upwards to use snuff in the mouth. He then turned his attention to the Confederates and the plight of North Carolina unionists. If everyone in Bristol that sympathizes with the South had seen and heard the tales of the suffering and abuses the poor farmers and women of Newbern and vicinity have had to put up with, you would all go in for butchering every officer of the Rebel Army as fast as they are taken prisoners. You dont know anything about their suffering in Bristol.

It is necessary to visit their homes and hear the tale of woe and the abuses and privations they have undergone and then turn and put their hand to our shoulders and say thank God your army is here and may it never leave until peace is restored. Some have had their husbands, brothers, and fathers dragged like brutes from their firesides to fight against the laws they love and revere. Tell your Mother if she could spend one hour in conversation with some of her sex I have conversed with, she would be ready to have the whole South exterminated, for surely the most of the officers deserve it. I should think that the case of Slocum and Ballou was enough to make the whole North indignant. It will not do for the 21st Georgia Reg to be taken by this Division.

By Slocum and Ballou, George was referring to Colonel John S. Slocum and Major Sullivan Ballou, both of the 2nd Rhode Island, who were killed at First Bull Run the previous July. After the Confederates evacuated their Manassas defenses in March 1862, a delegation of Rhode Islanders sought to exhume the remains of fallen Rhode Islanders and return them to the north. It was discovered that many of the graves had been desecrated by a Georgia regiment.

Major Ballous body had been mutilated and dumped into a ravine. The Georgians had mistaken Ballous body for Colonel Slocums, it was rumored. Of the letter, George wrote that Gen. Colyer to provide provisions free of charge to all the poor and destitute, referring to Vincent Colyer , founder of the U.

The letter was written on 4 pages of a 5 x 8 bifolium stationery sheet. It is in excellent condition as shown. Creased at the original mailing folds. The stationery has a patriotic decoration featuring the bust of General McClellan flannel by muskets, flags, and cannon. A postal cover addressed to Gussie is also included, although the cover includes neither a stamp nor postmark.

It has a nice decoration of an officer, presumably George Washington, holding the staff of one U. Flag while another flag partially lays on the ground in the foreground.

Now I will attend to your wants and enclose a Rebel letter as you requested. Remember me to all the Family. Remember me to Annie and Abby D. I have had a bad cold for the last two weeks, which unfits me for writing or anything else. We had two Young Misses onboard yesterday to see the Vessel. They were attended by their Father. You may tell Mother the girls were here, but do not tell her their Father was with them, and they are the first that I have seen of their age but what eats snuff. I want you to write often and tell me all the news. Mother thinks I have lost all sympathy for the South.

I plead guilty to the charge. It is necessary to visit their homes and hear the tale of who and the abuses and privations they have undergone and then turn and put their hand to our shoulders and say thank God your army is here and may it never leave until peace is restored.