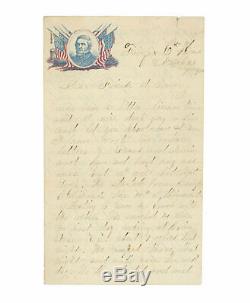 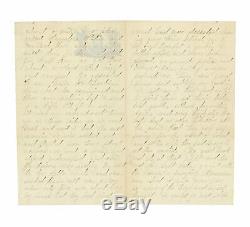 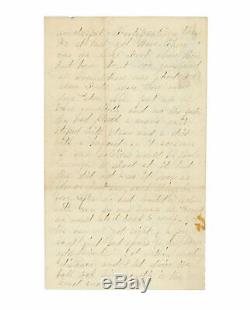 An interesting March 1862 letter written by an unidentified Union soldier, likely an artilleryman. It is unsigned, and the narrative ends in such a way as to suggest that the letter originally contained an additional sheet or sheets.

We started from Camp California the 10th of this month, he wrote, expecting to have a brush with the rebels. Camp California, located outside Alexandria, was home to several regiments of Sumners 2nd Corps, and so its possible our author belonged to that organization.

He then described their course of march the following day that led them to Bull Run, at a point about four miles from Manassas Junction. He expected to see heavy Fortifications there, but was disappointed to find only rifle pits. Went to the Rebel huts and ransacked them.

It was a regular city. There were about 300 log houses that they had lived in and had now deserted, leaving everything behind. One of the boys brought a firkin of butter which had never been opened. We found pails and brought them full of sugar, peanuts, &c. There was good flour and articles for cooking, all left as if they had no time to pick them up.

Their beds, bed quilts, sabres, bayonets, knives, and everything else they left, and we were thinking all the while that they were suffering for the want of food and all the while they had more to eat than we did. The author then wrote how the next day he and some friends went to see the fortifications at Manassas, where he saw several of the famous Quaker guns, logs or other materials made to look like artillery pieces, and placed in positions to fool the enemy. There was one large Fort where there had been about 100 guns, and all around there was about 50 sham Forts where there were logs and stove pipe put up to scare somebody, and on the forts they had placed a mans suit stuffed with straw and a stick with a bayonet on it so some of our soldiers would be fools enough to shoot at it, but they did not come it over us for we had seen such things before.

The letter ends abruptly after the author wrote of shooting a pig on the way back from Manassas. The letter was written on 4 pages of a 4 3/4 x 8 bifolium stationery sheet that bears a patriotic decoration featuring General Winfield Scott flanked by muskets, drums, and US flags. The letter is in very good condition with even toning. There is an old tape repair to the centerfold extending about two inches from the bottom edge of the sheet. I have wrote two other letters to Frank and Marion and have not had any answers, but I will let that drop. We started from Camp California the 10th of this month, expecting to have a brush with the rebels. We marched 14 miles the first day, arriving at Brimstone Hill about 7 oclock that night.

We then started for Bull Run. We got there about 8 oclock that night and camped. We expected to see heavy Fortifications there, but we examined and there was nothing but a sort of Rifle Pit to be seen.

It was an embankment thrown up on three sides, so we went back and went to bed. The next morning we were rousted out and started from there about 6 oclock. We went 4 miles and stopped, unharnessed, and while the drivers were feeding we went to the Rebel huts and ransacked them. We went back and stayed that night and the next day. Captain had us go out with the horses a foraging.

Manassas was about 4 miles from there, so some of the boys and myself thought we would go and see the wonderful Fortifications there. We at last got there. After we had loaded ourselves with corn for our horses we thought we would start back to camp. On the way I got sight of a pig, so I just put spurs to my horse after him. I got within shooting distance and I let drive.

The ball took him exactly in the head and he dropped. Please see my other items for more interesting Civil War letters, documents, and images. The item "1862 Civil War Soldier Letter Looting Rebel Fortifications at Manassas" is in sale since Friday, December 27, 2019.