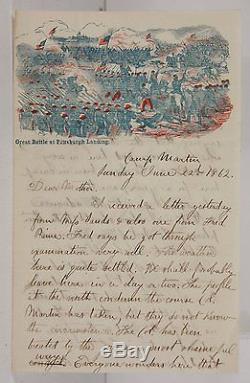 And great grandson and namesake of Founding Father and first Chief Justice of the United States Supreme Court John Jay. The Letter is written to Private Jay's mother and written on a four page, folding letter sheets measuring 5" by 7 3/4". The illustration at the top of the first page is a wonderful view of a clash between massive Confederate and Union forces with the Battle of Shiloh raging. Visible are a number of American and Confederate Flags with what appear to be Union Zouave forces in the foreground and the Confederate forces in the distance. The Letter is dated Sunday, June 22, 1862 from Camp Martin and reads in full.

I received a letter yesterday from Miss Sands + also one from Fred Paine. Fred says he got through examination very well.

The weather here is quite settled. We shall probably leave here in a day or two.

The people at the north condemn the course Col. Martin has taken, but they do not know the circumstances. Everyone wonders here that the Col. Did not long ago turn around + take his reg't.

We were ordered out for the defence of the Capitol. We have been ordered way into Virginia. The officers have objected to it saying that the three years men, who are encamped here in every direction + who have been in camp here for a year, are the men who should go into the advance + that we should take their places. Of War promised the Col. That we should not be ordered out of the District about ten days ago, but he came down here + was so much pleased with our discipline that he considered us fit for the field + therefore ordered us to go.

Martin is liked by every man in his reg't. You will doubtless be surprised at my writing on such paper, but my paper gave out + all that I could find in camp was of this nature. My turn on guard duty comes around again tomorrow. I cannot get a pass today so I could not go as I thought to as church is about a mile from here.

I expected to receive a letter from you yesterday but I was disappointed. They began today to serve out hard biscuits instead of bread. When you write tell me more about home affairs.

What goes on upon the farm and in the neighborhood? What news do you have from Mr. Is Laura + her family still with you? Monday morning June 23rd, 1862. I received a letter from Father yesterday afternoon containing the vaccine matter and also a letter from you + Alice. The soap I brought with me is all gone long ago, but the gov. I wash my own towels + handkerchiefs, but if you????????????? The prevalent rumor in camp this morning is that we go in a day or two to the Washington Navy Yard. Was obviously a well to do and very well educated soldier from a prominent New York family.

It is rather interesting to note the perspective from which Private Jay views his service which would conclude after 3 months when the Regiment would be mustered out. It appears that later in the Civil War, Jay enlisted as a surgeon and served in New Orleans.

This wonderful, Civil War Soldier's Letter is in very good condition overall. The main body of the Letter is written in iron gall ink while the added note dated June 23rd is written in pencil however. The ink handwriting is neat and very legible while the pencil portion is just a bit harder to read. The illustration at the top of the Letter Sheet is dark and bold and very attractive.

There is some scattered light soiling but overall the Letter is well preserved and display nicely. A fascinating Handwritten Manuscript Civil War Soldier's Letter dated June 22, 1862 and written on a wonderfully illustrated Civil War Letter Sheet depicting the Battle of Shiloh and a fantastic addition to any collection!! And Click Here to Add Us To Your Favorite Sellers List. Click Here to Discover More About this Item and Many Others on Our New Informational / Non-Commercial / Reference Blog - Walnutts.

The item "1862 CIVIL WAR SOLDIERS LETTER ON BATTLE OF SHILOH ILLUSTRATED LETTER SHEET" is in sale since Friday, October 02, 2015. This item is in the category "Collectibles\Militaria\Civil War (1861-65)\Original Period Items\Correspondence, Mail". The seller is "walnutts" and is located in Brewster, Massachusetts. This item can be shipped worldwide.