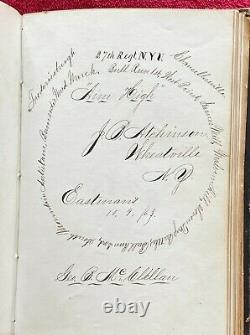 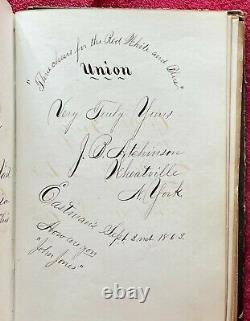 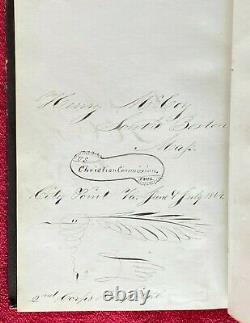 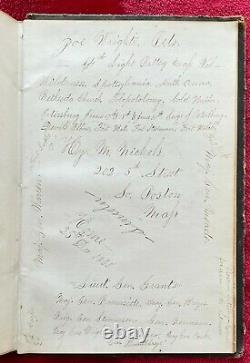 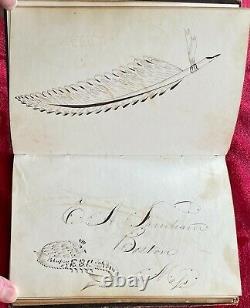 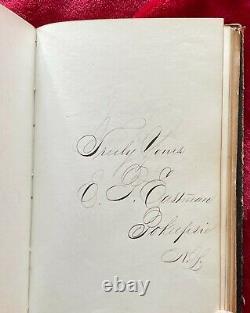 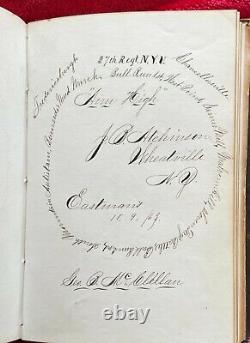 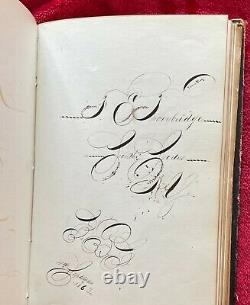 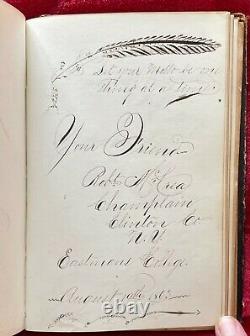 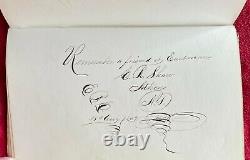 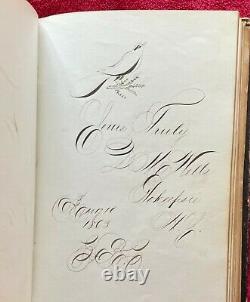 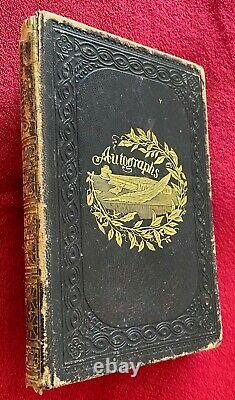 We are offering an autograph book with approximately 100 signatures / inscriptions of students of Eastman Business College, located in Poughkeepsie, New York, which was founded in 1859 by Harvey G. Some of the signers had fought in the Civil War. The dates of the inscriptions were July, August, and September, 1863; and one is December 25, 1865.

Each of the signers wrote the city or town, and state where he were from, which included New York, Connecticut, Massachusetts, Vermont, Maine, Pennsylvania, Ohio, and Delaware. The signatures and inscriptions are written in beautifully ornate hand-writing, some of which have information on their CIVIL WAR RECORDS, including regiments and battles in which they fought. Taylor of Fremont, Ohio, who listed the battles in which he fought with the 8th Ohio Regiment - Laurel Hill, Romney, Winchester, Antietam, and Fredericksburg. In our research, we located the 8th Ohio Regiment roster, and were able to locate Charles S.

Taylor who was in Company F. He was a corporal who was wounded at Fredericksburg and discharged in March of 1863. (And as we can see, he does list Fredericksburg as the last battle he participated in).

Jonathan Burtch Atchinson writes 27th Reg't. Below he writes "Aim High", then his name, Wheatville, NY, and the date 10.9. /63; all of which is encircled with the names of the battles in which the 27th Reg't. Fought: Bull Run 1st, West Point, Gaines Mill, Malvern Hill, Seven Days Battles, Bull Run 2nd, South Mountain Antietam, Burnsides's Mud March, Fredericsburgh, and Chancellersville. One of the last pages has an entry by Hy.

Nichols then writes "HOME" 25th Dec. Boston, Massachusetts indicates he was a member of the U. Christian Commission of Philadelphia, who was assigned to the 2nd Corps Hospital in City Point, Virginia during June and July of 1864. City Point (now Hopeville) was where General Ulysses S.

Grant's field headquarters were located during the Petersburg Campaign at the end of the Civil War, in late spring of 1864. We assume the hospital was located there to treat the wounded Union soldiers. One of the signers, John S. Lauer of Sinking Spring, Pennsylvania, who signed the book on September 2, 1863, died at the age of 24 about 2 1/2 years later in May 1866.

We were able to find this information on the findagrave website. Eastman of Poughkeepsie, were authors of " A Treatise on Counterfeit, Altered, and Spurious Bank Notes - With Unerring Rules for the Detection of Frauds in the Same". CONDITION: Pages of the autograph book are Excellent; edges of the covers are worn; spine is worn, with a piece of leather missing at the top. We have mentioned the Civil War soldiers who have identified themselves as such; there could possibly be others, or other people of prominence, but there are way too many for us to research. POINT OF INTEREST: The city of Poughkeepsie, is sometimes writen as "Pokeepsie" in some of the inscriptions, which is not surprising as back then occasionally there were two different spellings for names. This item is in the category "Collectibles\Militaria\Civil War (1861-65)\Original Period Items\Other Civil War Original Items". The seller is "propicker" and is located in this country: US. This item can be shipped worldwide.