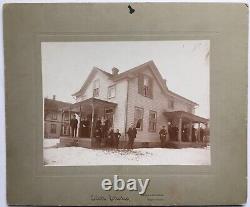 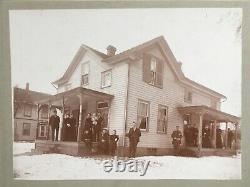 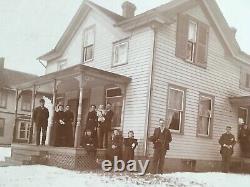 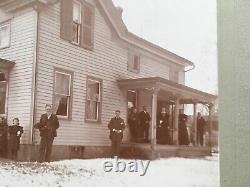 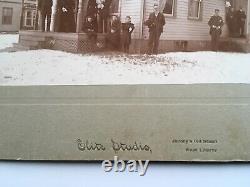 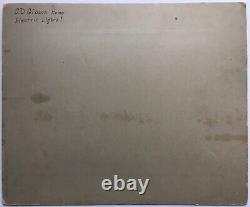 Depicts Iowa Civil War veteran and rebel prisoner of 13 months C. Gibson as on old man standing out front of his West Liberty, Iowa home surrounded by his family. Printed photographer info at base reads Elite Studio, Jacoby's Old Stand, West Liberty. Inscriptions on verso read C. The old soldiers of Muscatine county many years ago won recognition from every lover of the republic as worthy of the profoundest gratitude, and to this class belongs C.

Gibson, whose name stands at the head of this sketch. Born in Knox county, Ohio, September 24, 1840, he is the son of Joseph M. The father was a native of new Market, Maryland, and the mother of Winchester, Virginia. They were married in the Buckeye state and came west to Cedar county, Iowa, in 1853. In 1861, they removed to a farm in Muscatine county, which Mr.

Gibson cultivated for fourteen years, retiring to West Liberty in 1875. The parents were both called to their reward in 1890.

Gibson began his education in the district schools of his native state and after coming to Iowa with his parents was a student in the schools of Cedar county. He continued upon the home farm until after arriving at the age of twenty years and then in the response to the call for soldiers to defend the Union, he enlisted in Company C, First Iowa Volunteer Infantry, for three months, reenlisting in Company E. Eighteenth Iowa Volunteer Infantry, June 22, 1862, and continuing until his discharge in August, 1865. He was wounded in a rear guard attack at Moscow, Arkansas, the bullet striking his arm and severing an artery.

One of his comrades reached his side and stopped the flow of blood just in time to save his life. He was taken to the hospital at Camden Arkansas, and, having been left behind when General Steele retreated after General Banks' defeat on Red River, he was made a prisoner and for thirteen months was detained at Camden, Shrevesport, and Tyler, Texas, carrying an open wound during the entire time. He and other prisoners escaped from the stockade at Tyler and with two companions he traveled by night and until the middle of the next afternoon when they lay down to sleep in a pine forest. About sundown they were awakened by an ominous baying of bloodhounds and were recaptured and taken to the home of a ranchman in the neighborhood, where they were kept all night and then again placed in the stockade at Fort Tyler.

The colonel of the confederates wrote an order and placed it in the hands of two mounted guards, who conducted the prisoners to the office of the provost marshal in the city of Tyler. After looking over the order the provost marshal remarked : " I will put them where the dogs won't catch them again " The whole party was conducted to the city prison and put into a cell, sixteen by sixteen feet in size, with twenty-six others, making twenty-nine prisoners in this little room. In the center of the cell was an iron cage seven or eight feet square on the top of which was a space through which a man could crawl between the cage and ceiling. This was the only spot where it was possible to lie down and the prisoners drew lots as to who should sleep on top of the cage. It was the fortune of Private Gibson twice in the course of nine days and nights to have the opportunity to recuperate on the cage.

The iron bolts protruded through the top to the great inconvenience of the unfortunate prisoners. This cage is now to be seen at the poor farm in Smith county, Texas, and Mr. Gibson contemplates a visit to the town principally in order to ascertain how far the iron bolts actually projected, as it was weeks after leaving the cell before he recovered from the dents made in his body by the iron bolts. While in this prison the welcome news came of the surrender of General Lee and soon afterward the doors were thrown open and the prisoners went forth free.

After returning from the war Mr. Gibson engaged in farming in Muscatine county until 1875, when account of his wounded arm he retired from agriculture and moved to West Liberty, where he followed various pursuits, including the grocery business and the feed business, being for nine years past a shipper of hay and straw.

He has used good judgment in commercial affairs and owns a handsome residence and three other buildings in West Liberty. Gibson was united in marriage to Miss Sarah Means, who has been to him a faithful companion and advisor. Politically he voted as he fought and fraternally he is identified with the Grand Army of the Repiblic. He received a rude introduction to the realities of life duting the Civil war, from the effects of which he has never fully recovered, but he has always retained a genial and companionable disposition and in the face of difficulties arising from ill health has overcome obstacles that would have long ago defeated a less resolute spirit. He plainly deserves an honorable place among the substantial citizens of Muscatine county.

In Very Good overall condition. Rigid paper board mat is sharp with gentle corner wear and soiling and a small mark to the top center. Gold gilded titling at base.

Measures 8 1/4" x 6 1/4" and 12" x 10" with the mat. Please enjoy the photos for further item details and if you have any questions feel free to ask. Thank you and be sure to check out our other listings!

This item is in the category "Collectibles\Photographic Images\Photographs". The seller is "massachusettsantiques" and is located in this country: US.