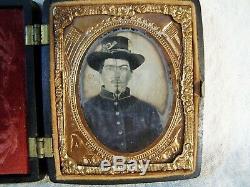 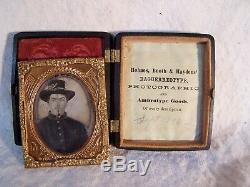 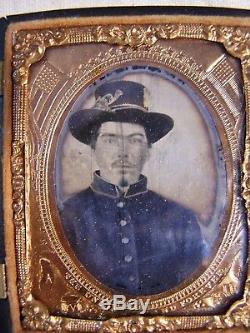 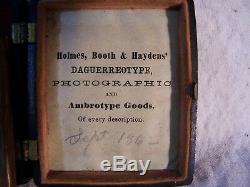 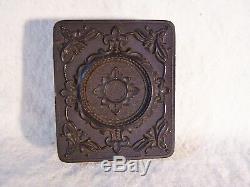 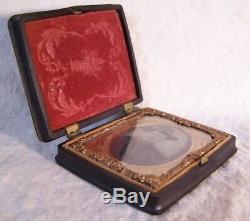 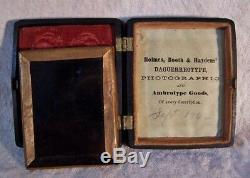 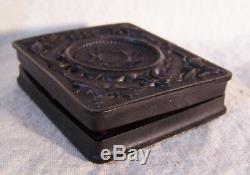 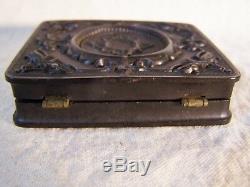 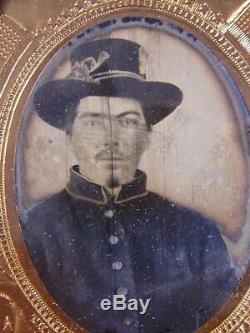 Antique Ambrotype / Daguereotype UNION CIVIL WAR Native American SOLDIER in Gutta Percha Case; DATED Sept 1862. WONDERFUL estate find from Connecticut estate of. Gillett (Gillette) family, Wheeler, Mead extended family. I also had photo albums with pictures of other family members in Civil War (Union) uniforms. 5 members of the family served in the Civil War in Connecticut regiments. This Gutta Percha case is in EXCELLENT CONDITION; no chips or cracks! The case has the photographer's insert inside: HOLMES, BOOTH & HAYDENS' Photographers which was founded in 1853 in Waterbury, Connecticut; and it is dated SEPT 1862. The photo is a Union / Federal soldier in uniform; I believe this is a Native American probably an Algonquin Indian as many Algonquin served in the Connecticut and New York regiments. He is wearing a Hardee hat with the 2 insignia pins and ostrich plume he is probably cavalry? And Union uniform with typical piping on the collar. There is a little minor aging to the photo, but it is still very clear and easy to view. Case is 3" x 2 1/2". Photos of Native American soldiers are VERY VERY RARE!!!! The facial structure, lack of facial hair, eye and brow structure all seem to indicate that this soldier is a Native American. I have another one from the same estate, (a Confederate), so check my other listings. The item "Antique Photo Daguerreotype UNION CIVIL WAR Native American SOLDIER Gutta Percha" is in sale since Friday, April 12, 2019. This item is in the category "Collectibles\Militaria\Civil War (1861-65)\Original Period Items\Photographs".