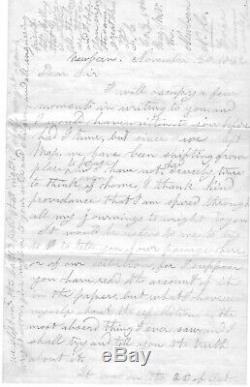 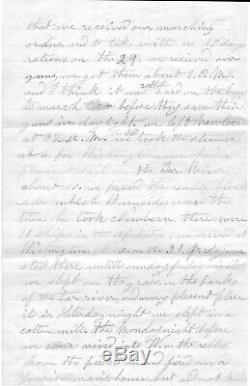 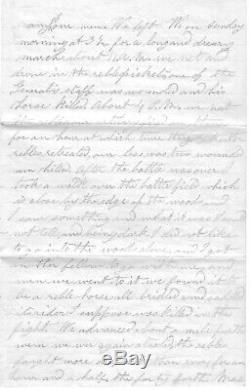 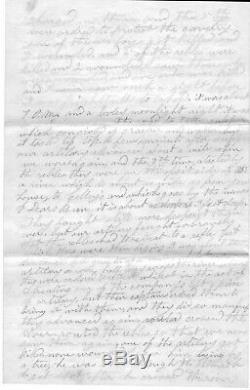 Regiment Massachusetts Volunteer Militia was originally a peacetime infantry regiment that was activated for federal service in the Union Army for three separate tours. The second term of service lasted nine months, from September 1862 to July 1863 during which they were stationed in New Bern, NC, and participated in several expeditions.

In this 5 x 8, 4 pp, Civil War soldiers letter written from Newbern, NC, November 20, 1862, our soldier who signs with his initials L. Provides details of several battles involving with details on the deaths of soldiers and those who were wounded. Since we left Massachusetts, we have been shifting from place to place and I have not had scarcely time to think even of home. It would be useless [for] me to try to tell you of our passage herefor I suppose you have read the account of it in the papers but what I have read myself about the expedition is the most absurd thing I ever sawI shall try to tell you the truth about it. It was on the 20.

Of October that we received marching orders and to take with us 10 days rations. We received our gunsIt was rather hard on the boys to march before they saw their guns in the daylight.

We took the steamer at 6 for Washington [NC]. We had a pleasant sail on the Tar River. About 10, we passed theblockade which Burnside crossed the time he took Newbern. There were 10 ships in the expedition.

We arrived at Washington, NC, on the 31. On Saturday night, we slept on the grass on the banks of the Tar River, a very pleasant place Saturday night we slept in a cotton mill.

The Monday night before, we arrived into Washington. The Rebels drove the pickets in and fired on a Union mans house but did not kill any men. We left Washington on Sunday morning at 3 ½ for a long and dreary. One of the Generals staff was wounded and his horse killed. Our loss was two wounded men killed. After the battle was over, I took a walk over the battlefield which is close by the edge of the woods and I saw something and what it was I could not tell, and being dark I did not like to go into the woods alone. I got another fellow to go with me and wefound it to be a Rebel horse all bridled and saddled. Its rider I suppose was killed in the fight. We advanced about a mile from the menThe Rebels fought more desperate than ever for an hour and a half. Charged on them and the 5. Were ordered to protect the cavalry. One of the boys got killed and 3 wounded and 5 of the Rebels were killed and 2 wounded. I saw those who were wounded and one who was killed and I never saw such a sight as before A few minutes after supper, our artillery advanced about a mile when we were again and the 3. Time attacked by the Rebels.

They were on the opposite side of the riverThey fought still more desperate than ever but our artillery fought so bravely that the Rebels had to retreat to a rifle pit, which they were then digging. It was about the distance of a quarter of a mileOur artillery were half way across the river when they were ordered to retreat. Whileretreating one of the company left a piece of artillery but their captain ordered them to bring it with themThey advanced again, crossed the river, routed the RebelsOne of the artillery got killed.

I saw him lying by a tree. He was shot through the stomach. He got shot after he crossed the river.

We slept on the battlefield that nightL. Toning, folds, in pencil but very readable and fine descriptive Civil War letter. Our goal is to please every customer.

We are pleased to be members of The Manuscript Society, Universal Autograph Collectors Club and The Ephemera Society. The item "Civil War Battle Letter Of 5th MA Volunteers Describes Soldier Shot In Stomach" is in sale since Saturday, April 13, 2019. This item is in the category "Collectibles\Militaria\Civil War (1861-65)\Other Civil War-Related Items".