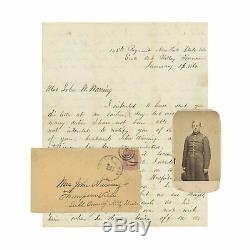 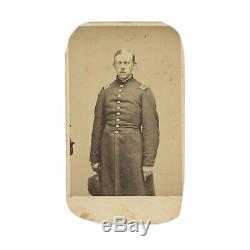 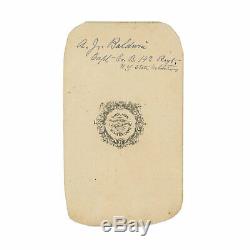 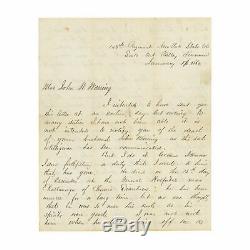 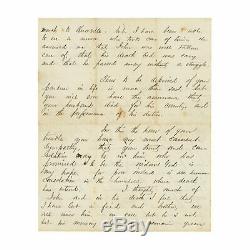 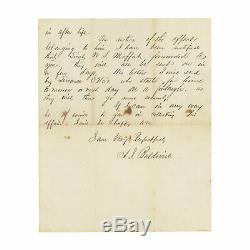 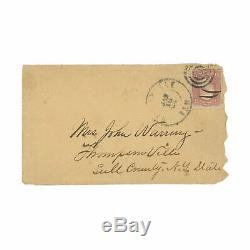 A CDV view of Captain Alfred J. Baldwin of the 143rd New York.

He wears a dark blue frock coat with his captains straps visible on the shoulders. His forage cap is held casually at his side.

He is identified in period ink on the reverse of the carte, where you will also find the backmark of New York photographer Bogardus. Good condition with trimmed corners. Baldwin was commissioned in January 1862, and served with the 143rd New York in both the eastern and western theaters of the war. He was dismissed in May 1864. The CDV is accompanied by a January 1864 letter written by Baldwin to the widow of one of his men.

Warring had died in the hospital the previous month while Baldwin and the regiment were participating in the Knoxville Campaign. Written a month after Warrings death, the letters intent was not to inform Mrs. Warring had been sick for some time, but no one thought that he was so near his end, as his spirits were good. While Baldwin wasnt with Warring at the time of his death, he later found a nurse who assured me that John was well taken care of, that his death bed was easy, and that he passed away without a struggle. He wrote that Warrings absence was felt by the rest of the men.

I thought much of John and in his death I feel that I have lost a friend and brother. He closes the letter by mentioning that Warrings personal effects would be forwarded, and that his letters would be carried by Private Terence ONeil (who sadly would die at a Louisville hospital in February). Also mentioned is Lieutenant William T. Moffat, who was discharged in February. The letter is in good condition with light toning and foxing.

It was written on three pages of a four-page bifolium stationery sheet measuring 7 3/4 x 9 3/4. It is cleanly split down the center fold and so is in two pieces.

Slight separation at a couple of the edges and where folds meet. Includes the original transmittal cover with a canceled 3-cent stamp, and addressed to Mrs. Warring in Thompsonville, New York. The cover is separated in two pieces, front and back. The full transcript of the letter follows. 143rd Regiment New York State Vols. It is not intended to notify you of the death of your husband John Warring, as this sad intelligence has been communicated.

He died on the 15th day of December at the General Hospital near Chattanooga of Chronic Diarrhea. He has been unwell for a long time, but no one thought that he was so near his end, as his spirits were good. I was not with him when he died, being off on a march to Knoxville, but I have been able to see a nurse who took care of him.

He assured me that John was well taken care of, that his death bed was easy, and that he passed away without a struggle. In this the hour of your trouble you have my most earnest sympathy, that you trust and consolation may be in him who has promised to be the widows God is my hope, for poor indeed is all human consolation in the household where death has entered. We call but he is not [there], but his memory shall ever remain green in after life.

The notice of the effects belonging to him I have been notified that Lieut. They will all be sent on in a few days. His letters I will send by Terence ONeil, who starts for home to-morrow or next day on a furlough, as they will thus go more securely. If I can in any way be of service to you in collecting his affairs, I will be happy to be.