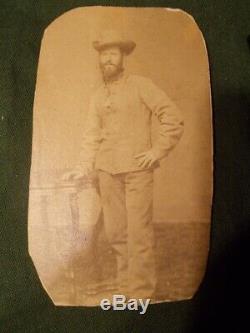 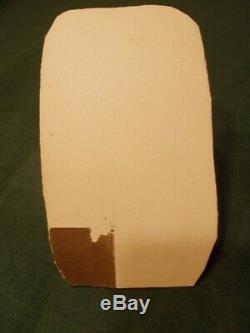 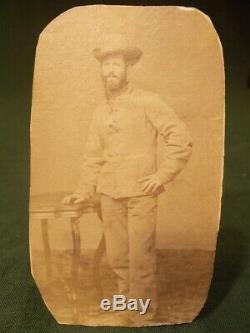 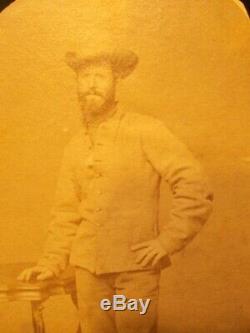 Offered here is an early Civil War CDV of a Confederate enlisted soldier, hand resting on a table as he stands for the photograph. He is clothed in an early war 7 button frock, with the longer tails that were discontinued to save material as the war dragged on. This coat appears to end at the wrist in a cuff, but the details would need better magnification than I have to tell.

It does have metal buttons, but not clear enough to identify. The photographer is unknown, but may have been from a traveling studio.

I have had images like this before, with no equipment or weapons and they were usually of captured Confederates. There is nothing on the reverse of the CDV. Under the limited magnification I have, there appears to be a small badge on the front of the slouch hat he is wearing, probably round and the size of a token or coin, but way too fuzzy to make out.

He may have a small portion of a handkerchief sticking out of the open upper third button location, but no other distinctive features to note. Largest dimension is just over 3 1/2 inches by just under 2 1/4 inches. Would look great framed in a CDV pocket from a period album. The item "Civil War Confederate Soldier CDV, Early 7 Button Frock, Trimmed, No Backmark" is in sale since Saturday, March 14, 2020. This item is in the category "Collectibles\Militaria\Civil War (1861-65)\Original Period Items\Photographs".