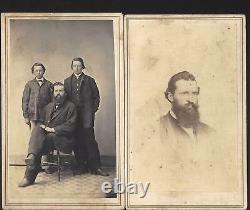 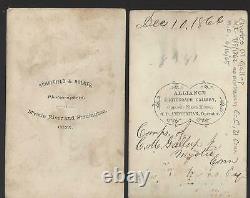 Served 8/62-6/65 from Groton Ct. The 21st Connecticut Infantry Regiment was organized at Norwich, Connecticut, on September 20, 1862, to serve for three years, under the command of Colonel Arthur H.

Provost and guard duty at Portsmouth and Norfolk November 10. Moved to Newport News November 10, and duty there February 1864.

Expedition up the James River to Fort Powhatan January 24-25. Moved to Morehead City, North Carolina, February 3, then to New Bern February 12, and duty there, Plymouth, and Washington, North Carolina, April. Near Blount's Creek April 5. Moved to Portsmouth, Virginia, April 28. Butler's operations on south side of the James River and against Petersburg and Richmond May 10-28. Swift Creek, or Arrow field Church, May 10.

This item is in the category "Collectibles\Militaria\Civil War (1861-65)\Original Period Items\Photographs". The seller is "civil_war_photos" and is located in this country: US. This item can be shipped worldwide.