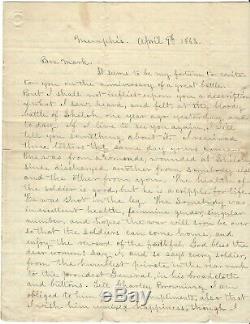 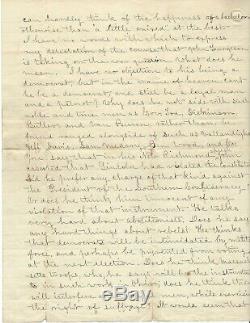 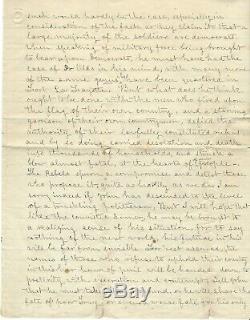 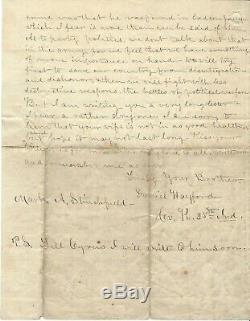 DANIEL HAYFORD was mustered into K Co. Infantry on August 19, 1861, as a Sergeant. He was promoted to 2. Lieutenant on November 1, 1862. Fought at the battles of Shiloh, Hatchies Bridge, Jonesboro and Bentonvile. In this superb, 3 1/2 pp, 7 3/4 x 9 3/4, letter written from Memphis, April 7. 1863, to his brother, Hayford speaks of the bloody battle of Shiloh, a comrade who was wounded at Shiloh and is a cripple for life, of his friend back home, John Furgeson, a Democrat Cant he be a Democrat and a loyal man and a patriot? He also writes, You say that in his new Richmond speech John asserted that Lincoln had violated the Constitution. Did he prefer any charge of that kind against the President of the Southern Confederacy or does he think him innocent of any violation of that instrument? Hayford is critical of his friend who thinks Massachusetts troops will be at work in Ohio to interfere with loyal troops, while exercising the right of suffrage.

He also speaks of Clement Vallandigham, an Ohio politician who led the Copperhead faction of anti-war Democrats. Vallandigham was convicted in an Army court martial of opposing the war and exiled to the Confederacy. It seems to be my fortune to write you on the anniversary of the great battle. But I shall not inflict upon you a description of what I saw, heard, and felt, at the bloody battle of Shiloh one year ago yesterday and today. If I live to see you again, I will tell you something about it.

I received three letters the same day yours came. One was from a comrade wounded at Shiloh, since discharged... The health of the soldier is good, but he is a cripple for life.

He was shot in the leg... I have no words with which to express my detestation of the course that John Furgeson is taking on the war question. I have no objection to his being a democrat, but in the name of heaven, cant he be a democrat and still a loyal man and a patriot? Why does he not side with such noble and true men as Gov. Tod, Dickinson, Butler and Van Buren, rather than be found ranged alongside of such as Vallandigham, Jeff Davis, Sam Medary, Ben Wood and Co. You say that in his New Richmond speech, John asserted that Lincoln had violated the Constitution. Did he prefer any charge of that kind against the President of the Southern Confederacy?

Or does he think him innocent of any violation of that instrument. He talks very hard about abolitionists. Does he say any hard thing about rebels? He thinks that democrats will be intimidated by military force, and perhaps be prevented from voting at the next election. Does he think Massachusetts troops, who he says will be instruments in such work in Ohio; does he think they will interfere with loyal men, while exercising the right of suffrage?

It would seem that such would hardly be the case, especially in consideration of the fact as they claim it that a large majority of the soldiers are democrats. While speaking of military force brought to bear upon democrats, he must have had the case of Dr. Olds in his mind, with many more of the same men who fired upon the flag of his own country, and a starving garrison of their own countrymen, defied the authority of their lawfully constituted members, and by doing so carried desolation and death into thousands of households, and struck a blow almost fatal, at the hearts of our people. The Rebels spurn a compromise and detest those who purpose it, quiet as heartily as we do.

But I will hope that like the convicted sinner, he may be brought to a realizing sense of his situation for to say nothing of the next world, his future in this will be far from enviable. For rest assured, the names of those who refuse to uphold their country in this her hour of peril will be handed down to posterity with...

Tell John that he must take a different ground or he will share the fate of poor Gray or even a worse fate for his only crime was that he was found in bad company which I fear is more than can be said of him. As to party politics, we dont talk about that in the army for we feel that we have something of more importance on hand. We will try first to save our country from disintegration and dishonor & then we will fight with less destructive weapons that battles of political warfare... Folds, toning, light soiling, but a superb letter speaking of the issues that were splitting the nation at the time and at the heart of the Civil War.

Our goal is to please every customer. The item "Civil War IN 25th Soldier Speaks Of Shiloh, Disloyalists Viewed With Contempt" is in sale since Monday, May 11, 2020.

This item is in the category "Collectibles\Militaria\Civil War (1861-65)\Original Period Items\Correspondence, Mail". The seller is "bminnocci6mtm" and is located in Boston, Massachusetts. This item can be shipped worldwide.