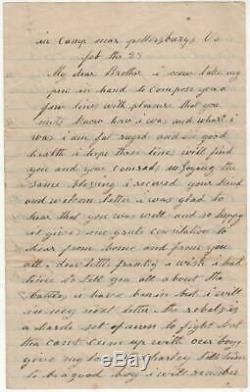 Civil War letter - Union soldier describing shelling at the siege of Petersburg. Civil War letter from Union soldier besieging Petersburg, Virginia describing shelling by Confederate artillery. Near Petersburg, VA: [1865] In this three-page letter, datelined in Camp near pettersburgs Va, to a younger brother, George makes light of the discomfort of camp life and describes how he jokes with himself to make it more palatable: i found a further (feather) the other night i turned over the bord and put it on remine me of a further bead (feather bed).

I sleep as soft as thoe i was on the soft side of a pine board. More importantly, he describes an artillery barrage, enemy desertions, and his weariness of the war: the rebels is a harde set of men to fight but tha cant com up with our boys. We are in plane sight of pettersburgs, we had orders this morning to advance and charge on pettersburgs but it so hapened we did not if we had we wold ben cut down like grass before a sith but we are waiting for further orders the rebels fire shells at ous and tha burst over our heads as thick as hale tha killed three or men of another regiment. View My Other Items For Sale. I know that this can be expensive, but I've switched to this method because I've had too many claims of non-receipt by international buyers.

Please don't assume anything that is not specifically stated or shown on this listing page. This is a Read'Em Again Books sale.

Tailor your auctions with Auctiva's. The item "Civil War letter Union soldier describing shelling at the siege of Petersburg" is in sale since Friday, July 5, 2019. This item is in the category "Collectibles\Militaria\Civil War (1861-65)\Original Period Items\Correspondence, Mail".