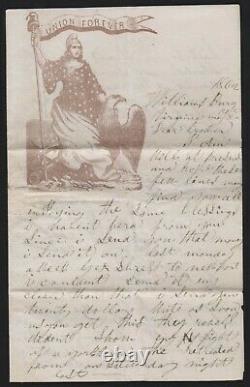 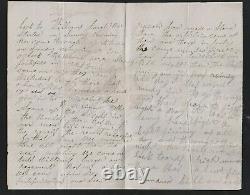 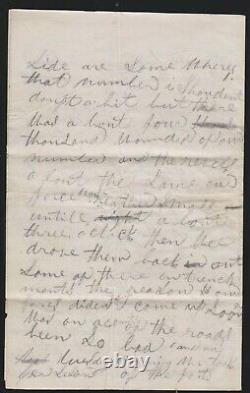 Fantastic letter written by a soldier who participated in the Battle of Williamsburg, where McClellan's forces clashed with Johnston's and Longstreet's troops at Fort Magruder. Three days after the battle, on May 8, 1862, an unidentified soldier wrote his account of the battle to his brother. Using all four sides of a statement sized. The letter reads [with multiple spelling and grammatical errors].

I send it on last Monday a week by Stress? I couldnt send it any closer than that.

I send you twenty dollars. Write as soon as you get this. Hey rebels dident show eny fight at Yorktown the retreated from on Saturday night last back to Williamsburgh. Wee started on Sunday morning. Wee come through Yorktown on Sunday morning at ten oclock.

The where very strong fordifide in Yorktown. Whee come on on they road to Williamsburg there was about two hundred ahead gon in a cavalry. The scrimage with some of the secesh in the woulds there was two of our own men kill and four of the rebels.

There was about five hundred cill (kill) and each Side are some otheres that number. I shouldent doubt a bit but there was a bout four thousand wounded of and number and the rebels a bout the same. Our force now retired signal until a bout three o clock then we drove them back out. Some of there in trench ments the reacon.

And forces didnt come up. Soon was an account of the roads been so bad and on Tuesday morning the took??? The item "Civil War letter Williamsburg Battle soldier account Union Forever stationery" is in sale since Tuesday, November 3, 2020. This item is in the category "Collectibles\Militaria\Civil War (1861-65)\Original Period Items\Correspondence, Mail".