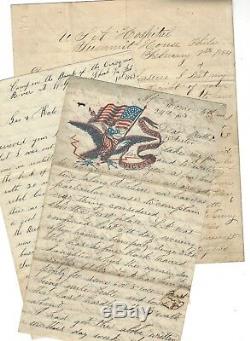 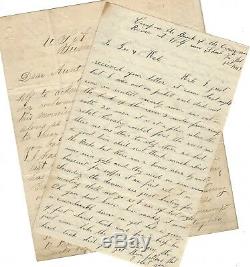 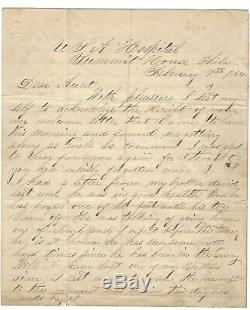 Offering three unrelated Civil War letters, two by soldiers and one being from the home front, 10 pp. Highlights of the letters is a discussion about guarding the banks of the Occoquan River in Virginia because Rebel Cavalry could ford the river and soldiers deserting by going on a French furlough to Canada. A soldier writing another letter from U. Hospital and Summit House, Philadelphia, speaks of his brother, also in the army: He has frozen one of his feet until his toe came off. He also writes of losing his young brother who was about seven years old and remarks that his career was short. There were instances of children enlisting in the Civil War, some as drummer boys. Writing to his aunt from the hospital on February 7, 1864, James Barrett.

In part, I had a letter from my brother David last week. He was in good health but he has frozen one of his feet until his toe came off. He is talking about going home on furlough and I expect by this time, he is at home. He has seen some pretty hard times since he has been in the army. I have lost one of my brothers since I last wrote to you.

The one next to the youngest was buried this day two weeks ago. He was about seven years old. His career in the world was short but he is in a better world where sickness and sorrow, pain and death are feared no moreAs for me reenlisting, you need not fearI will wait a while. February 1, 1865, our writer who signs with the initials SWJ, writing to George and Kate, from amp on the Bank of the Occoquan River, Virginia. In part, Was out on the bank of the river, two miles from camp with 20 men. It is at a place where the Rebel Cavalry could ford the river. There [was] no one there to stop them. We had a good time. Did not think much about the Rebs but there was a house near by and some nice gals and they made us some warm biscuits for supper. It was first rateSunday the drums are just beating for meetingYou dont know how muddy it was. It is now considerable snowGuess P dont think it is Sunday as he is out to work on the road with 300 men. They are laying down logs, 6 miles, for teams to go on so that we can get our provisionWe have just been paid off. We only got 1 month, 21 daysowe us yet 3 months payOur second lieutenant will go home if he lives to get well enoughWe hear today that they are going to draft the 9 month men before they go home but I dont see it. Reckon they will find some will take a French furlough and leave for Canada. The third letter is from the home front, written on patriotic stationary, dated 5. [18]63, with family news regarding childhood diseases and vaccinations as well as planting news. I have been very busy this springplanted more ground than usualExpect to go sheering tomorrow if it does not rainMy mare has a colt which will be 3 weeks old tonightFather has one nearly 2 weeks older than mine. I went to the mill and got 8 bushels of wheat ground Signed by his first name, which is difficult to decipher. Folds, toning, some soiling with a few edge tears. Our goal is to please every customer. We are pleased to be members of The Manuscript Society, Universal Autograph Collectors Club and The Ephemera Society. The item "Civil War Letters - Frozen Foot, Toe Came Off, Child Soldier Dies" is in sale since Friday, July 5, 2019. This item is in the category "Collectibles\Militaria\Civil War (1861-65)\Original Period Items\Correspondence, Mail". The seller is "bminnocci6mtm" and is located in Boston, Massachusetts. This item can be shipped to United States, Canada, United Kingdom, Denmark, Romania, Slovakia, Bulgaria, Czech republic, Finland, Hungary, Latvia, Lithuania, Malta, Estonia, Australia, Greece, Portugal, Cyprus, Slovenia, Japan, China, Sweden, South Korea, Indonesia, Taiwan, South africa, Thailand, Belgium, France, Hong Kong, Ireland, Netherlands, Poland, Spain, Italy, Germany, Austria, Bahamas, Israel, Mexico, New Zealand, Philippines, Singapore, Switzerland, Norway, Saudi arabia, Ukraine, United arab emirates, Qatar, Kuwait, Bahrain, Croatia, Malaysia, Chile, Colombia, Costa rica, Dominican republic, Panama, Trinidad and tobago, Guatemala, El salvador, Honduras, Jamaica, Bangladesh, Uruguay, Russian federation.