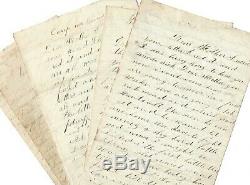 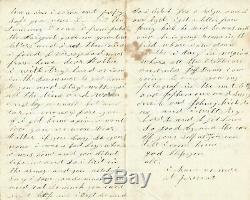 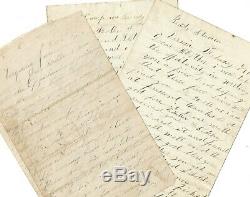 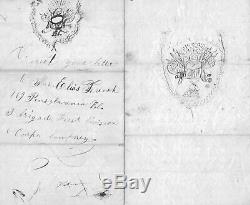 Frenchs enlistment covered the dates of many battles, such as the Bristoe Campaign, Rappahannock Station, Mine Run, Wilderness, Spotsylvania (where he was wounded), Cold Harbor. There is no indication when he actually left the service, but the latest letter is dated June 24, 1864.

Offering four ALSs from French to his mother. French writes from Virginia, where a number of major battles occurred. Although he spares his mother the dangerous details of battle, he mentions battles in general and most definitely fought in a number of them.

He speaks of preparing to take Richmond and General Grants need of a large army. He writes of rebels shooting at him. One bullet went through my cap, took a little hair off my head and the other bullet went through my coffee pot. 4 pp, 5 x 8, in small part, I was very sorry to hear you was so sick. Dear Mother you know I cant come home. We are going to move in a few weeks. We are going to take Richmond and General Grant wants all the men he can get and he wont let me [go] home. We have to fight many a hard battle this spring. God knows I might be killed in the first battle this Spring. Old General Grant wont let nobody home till next fall. So I got to fight till then. Then I can come home then if I haint dead in Virginia down with all the battles been in I came out pretty safe. God knows I will this summer. I cost you so muchI got a letter from Johnny Kick.

Dear Mother I was sorry when I heard that Juley Krees died. I went to school with her. Dear Mother what is Josephine Berniger doing now.

How is the weatherIt is pretty fair here in the fieldWhat regiment is George Baker in. You say he is enlisted in Albany He concludes with his sketch of a military drawing. 3 pp, 5 x 8, Camp near Brandy Station, February 22, 1864. I came in from picket and I got your two lettersThe rebels are starving.

Dear Mother I wish I was home to youI haint slept in a bed for a year and a half. I cant get for love or moneyWe are going to have a big fight hereThe rebels are busy in throwing up breast works and forts and rifle pits across the Rapidan River we had a big battle beforeI got drunk and kicked the coffee and spilt it all overJohn Kick is a friend of yours. He is adjutant of the 2nd Mounted Rifles. He sends his best respects to you.

I left my old regiment in New York County after coming home from the field. So, I did not like the old regiment.

So, I enlisted in the 119 P. I want to know if my uncle Charley live I the same placeand my Uncle Henry is boating yet.

Small paper loss and lightness to the fourth letter, affecting a couple of words. Frenchs creative spelling has been corrected for clarity in the transcription. A nice collection of soldier letters from this important regiment.

Beautiful military drawings in the second and third letters. Our goal is to please every customer. We are pleased to be members of The Manuscript Society, Universal Autograph Collectors Club and The Ephemera Society. The item "Civil War Letters PA 119 Soldier Reveals Rebel Bullets To Cap, Grant's VA Plans" is in sale since Tuesday, June 25, 2019. This item is in the category "Collectibles\Militaria\Civil War (1861-65)\Original Period Items\Correspondence, Mail".