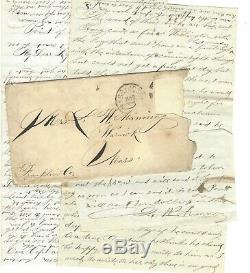 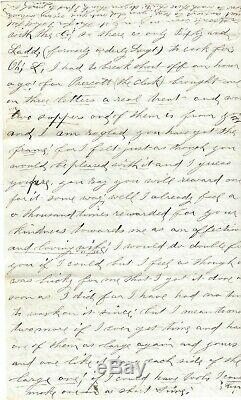 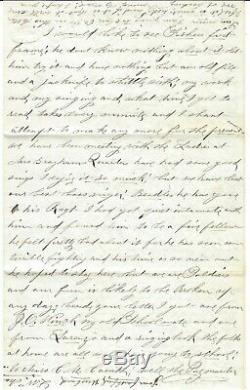 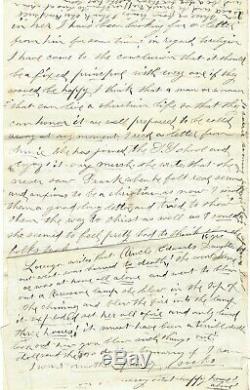 MANNING was a 26-year-old Armorer when he enlisted as a Private on December 31, 1863. He was mustered into I Co. Heavy Artillery and mustered out on September 26, 1865. Offering his 6 pp, 5 x 8, plus a small two-page, including the cover, addressed to Mrs.

Manning, Point of Rocks, March 25, 1865, in which Manning comments on Lincolns famous visit to City Point, which occurred the day this letter was written. We had orders to march at a minutes notice...

And yesterday fifty of our men and fifty men from two other companies started for the Pamunky River [VA] with a... Sheridans Army across the river. It is raining and they will have a bad time of it.

We received a dispatch ordering Lieut. Bixby to lay another bridge across the river here. He has had to send over to the mills and get every man so as to get it laid before the Army get here... Chamberlain went with the Co. So there is only Bixby and Ladd (formerly orderly Sergt) to cook for...

Beadles, he has gone to his Regt. I had got quite intimate with him and found him to be a fine fellow. He felt pretty bad about it for he has seen some terrible fighting and his time is so near out. He hoped to stay here but we are Soldiers and our fun is likely to be broken up any day... Our extra bridge was completed last night at twelve oclock and the troops are expected soon...

I have written a pretty long letter but cannot close without saying a word on the war. I dont know what is going to be done but Sheridan is surely coming to join Grant.

Abraham Lincoln came to City Point today. What his business is, I dont know. He was seen by our boys with Gen. They took the cars and went up to the front. I do think that in a few months of not weeks, they will make peace. Five powerful gunboats have gone up the river today through our bridge. We think that the troops are going to try hard to take the south side road and the gunboats have come up to protect the hospitals while the troops move to the left. I hope no more fighting will be done but they have just had a hard fight and it is reported that we got beat...

On a separate note, Manning writes, Lorenzo writes that Uncle Edwards Daughter out west was burned to death. She went home or was at home all alone and went to blow out a kerosene lamp.

She blew in the top of the chimney and blew the fire into the lamp and it exploded, set her on fire and only lived three hours. It must have been a terrible death... In March 1865, the Civil War was beginning to wind down. Several battles were fought in March, but President Lincoln accepted Gen. Grants invitation to visit him at his headquarters in City Point (Hopewell), VA.

Grants wife, Julia, had encouraged her husband to extend the invitation as a vacation for the war torn president. Vacation aside, Lincoln had other reasons for visiting City Point. The Siege of Petersburg was well into its ninth month. Lees Army was under the strain of severed supply lines, mounting casualties and dwindling morale. Lincoln needed to be with his top military officers so he could see the war to its end.

He also felt it important to show support to soldiers on the front line. On March 25, Lincoln, along with a large party of guests, headed toward Petersburg. He witnessed hundreds of Confederate soldiers who had been taken prisoner during the Battle of Fort Stedman, which occurred earlier that day. His joy subsided later in the day at Patrick Station when he saw wounded and dead Union soldiers.

Writing is tight in places and written in two directions on the first page. Stamp has been removed from the cover. Our goal is to please every customer. The item "Civil War MA 3rd Soldier On Lincoln Visit To City Point Near End Of War" is in sale since Wednesday, March 18, 2020. This item is in the category "Collectibles\Militaria\Civil War (1861-65)\Original Period Items\Correspondence, Mail".