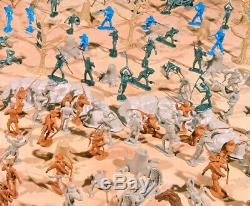 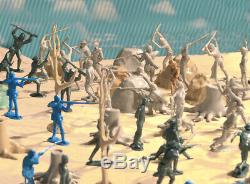 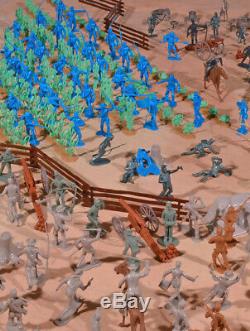 American Civil War Playset #1 - Marx Recast Antietam. The American Civil War Tri Series set #1 - Antietam. The Civil War began with small engagements but expanded over 4 years to include many of the largest land battles ever fought in the Western Hemisphere. This playset provides young collectors with the soldiers and accessories to re-fight the Battle of Antietam.

In the photo on the left is the cornfield, the site of the morning's see-saw battle for control of Robert E. Lee's left flank under "Stonewall" Jackson. In the middle of the picture is the Sunken Road, where Confederate regiments stood off repeated attacks by determined Union forces.

And on the right of the image is the bridge where the Federals made their great push to force the Southern forces from the field. The figures and accessories from this set can also be used to re-stage battles such as First Bull Run (First Manassas), Seven Pines, Seven Days Battles, Second Bull Run, Shiloh, Fredericksburg, Chancellorsville and others. The Marx recast sets which make up most of this collection were produced in the 1990's. They are long-retired and generally unavailable from other dealers. Most of the items included were originally found in the great Marx playsets of the 1950s, 60s and 70s.

Recast Rocky Defense positions Reusable Playset box Set contents may vary from description. The Toy Soldier Company, founded in 1985, has the world's most extensive stock of current and vintage plastic and metal toy soldiers and accessories by manufacturers including Britains Deetail, Timpo, Atlantic, Dulcop, Conte, Marx originals and recasts, Playmobil and others.

Please message us if you have any concerns. We have a strict policy, in accordance with U. The item "Civil War Playset #1 Marx Recast Antietam- 54mm Plastic Toy Soldiers" is in sale since Wednesday, November 27, 2019. This item is in the category "Toys & Hobbies\Toy Soldiers\1970-Now".