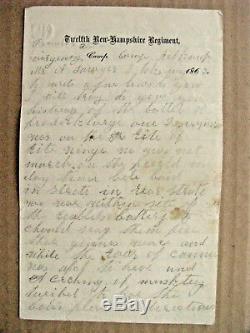 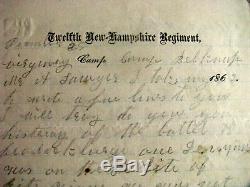 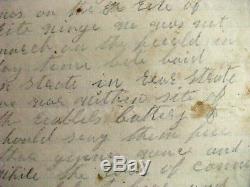 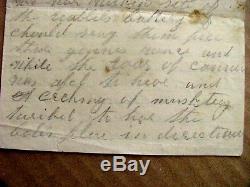 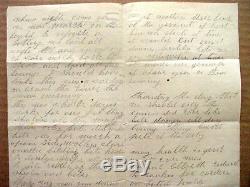 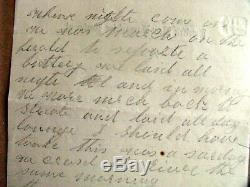 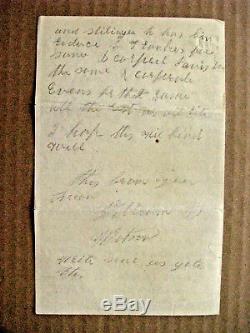 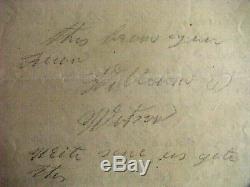 The 12th New Hampshire Volunteer Infantry was a notable Civil war combat unit, suffering over 500 killed and wounded at the combined Battles of Chancellorsville, Gettysburg and Cold Harbor. Private William P Watson of Alton, New Hampshire was wounded in action at the Battle of Chancellorsville and killed in action at the Battle of Cold Harbor, Virginia in 1864. An original Civil War letter from Watson, written on lined stationary with the regimental imprint "Twelfth New Hampshire Regiment", Virginny Camp Belknap, Christmas Day, Dec 25, 1862, ten days after the Battle of Fredericksburg: he writes that everyone was in the fight and we lay beneath the cannons of the rebels, amid the roar of cannons and cracking of musketry terrible to hear, we laid all night and crossed the river that morning, we are well, marched safely back, Samuel Elsberth was reduced to ranks for cowardice on the battlefield as were Elander & Davis. 4pp pencil, 8 x 5, signed William P Watson.

The letter is written by a barely literate farm boy from Alton, New Hampshire and is hard to read. Comes w service info- Corporal Watson served 1862-64, was wounded in action at the Battle of Chancellorsville, and was killed in action at the Battle of Cold Harbor. Edge wer, age stains, Overall VG. General Orders and other imprints. All items are unconditionally guaranteed to be authentic and in the condition as described. PLEASE READ DETAILS OF THE ITEM DESCRIPTION. I TRY TO DESCRIBE ALL ITEMS ACCURATELY.

The item "CIVIL WAR SOLDIER BATTLE OF FREDERICKSBURG LETTER KIA COLD HARBOR" is in sale since Sunday, August 11, 2019. This item is in the category "Collectibles\Militaria\Civil War (1861-65)\Original Period Items\Correspondence, Mail". The seller is "99counties" and is located in Winterville, North Carolina. This item can be shipped to United States, Canada, Mexico.