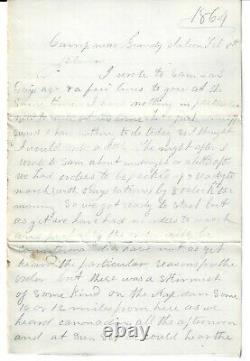 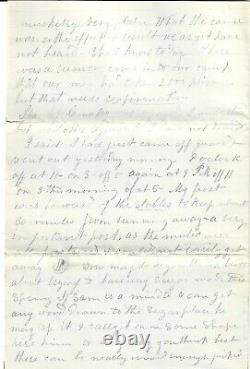 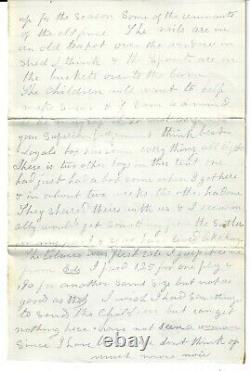 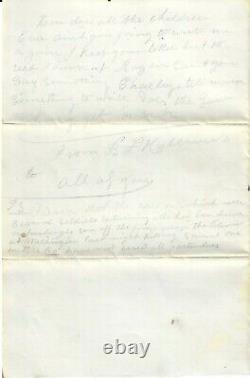 The Battle of Morton's Ford was fought February 6-7, 1864. To distract attention from a planned raid on the Virginia Peninsula at Richmond, the Union Army forced several crossings of the Rapidan River on February 6. Units of the II Corps under Maj. Caldwell crossed at Morton's Ford, the I Corps at Racoon Ford and the Union Cavalry at Robertson's Ford.

Ewell's Corps of the Army of Northern Virginia resisted the crossings with sporadic fighting and the most severe fighting at Morton's Ford. The results of the battle were inconclusive. Our soldier is likely describing noise from the battle. 4 pp, 5 1/4 x 8, B. Hilbrand writes from Camp near Brandy Station, Feb. I wrote to Sam 2 or 3 days ago... I have just come off guard duty... The night after I wrote to Sam about midnight... We had orders to be packed up & ready to march with 3 days rations by 8 o'clock the next morning. But as yet we have had no orders to march and probably the order will be countermanded. [I] have not as yet heard the particular reasons for the order but there was a skirmish of some kind on the Rapidan. Some 10 or 12 miles from here as we heard cannonading all the afternoon and at sunset we could hear the musketry very plain.

What the cause was or the effect & result we have not heard. There was a rumor came into our camp that our men had taken 2,000 prisoners, but that needs confirmation.

This was the Battle of Morton's Ford. The VT Cavalry was engaged I understand but what other regiments I have not heard. I learned that the cars on which were several soldiers returning who had been on furloughs run off the bridge across the Potomac at Washington last night killing several ones in this Company. Have not heard all the particulars.

Folds, toning and in pencil, but very readable. Our goal is to please every customer. This item is in the category "Collectibles\Militaria\Civil War (1861-65)\Original Period Items\Correspondence, Mail".