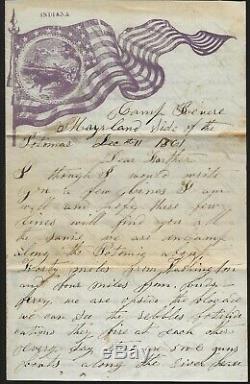 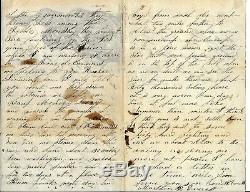 Condition as seen, Soldier's letter on a Patriotic Lettersheet from Private David R Everett of the 7th New Jersey Infantry, dated 12/11/61 from Camp Revere on the Potomac River to his Father. David died of disease on 5.26/62 at White House Va. Dear Father, I though I would write you a few lines. We are in camp along the Potomac about forty miles from Washington and four miles from Lees Ferry we are astride? Blockade, we can see the rebels fortifications. They fire at each other every day, there are 5 or 6 gunboats along the river ____ of the governments they throw strong shells among the rebels. Monday they burnt three buildings on the Virginia side if the river. We belong to Gen Hookers Division now. We ____ there this morning at sunrise rode the steamer down the river and about 30 miles from Washington and marched 10 miles further and camped for two days a place called Rimm Point?

Next day the boys from each co. Went about two miles further to clear ground where we are now encamped. Our camp is in a line of woods against the side hill.

Our parade ground is on the top of the hill when we are on drill we can see the river for miles. There are about forty thousand soldiers here. It is a very warm here today. Time it feels more like Summer than winter I think if the war is not settled soon I think there will be some heavy hard fighting and we are about close to the enemy.....

The seller is "civil_war_photos" and is located in Midland, Michigan. This item can be shipped worldwide.