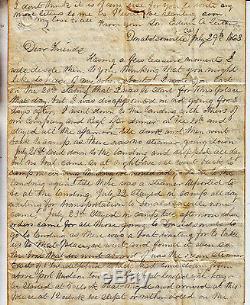 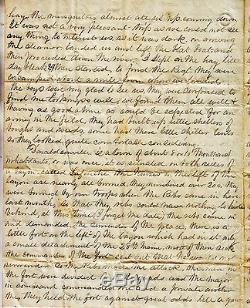 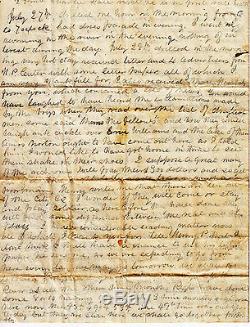 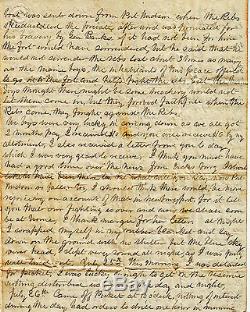 CIVIL WAR SOLDIER'S LETTER. [Written over a period of a few days].

[This letter could be a basis for a movie, ie: Glory]. We offer only genuine original items. A fine description letter from what is said to be one of the greatest events of the Civil War...

Four pages complete, written to his parents, signed'Your son Edwin'. He tells his parents of their recent action with the Rebels. He describes the place being defended by a small detachment of the 28th Maine with most of their men sick. The commander sent out word they will not surrender and the Rebels attacked.

The commander divided his men into two groups, one commanded by a Private. They drove them back with heavy loss, the gunboat from Port Hudson came and drove the Rebels away, the locals even helped them fight the Rebels... News in from home that many of their friends are being drafted and are laughing that they must be shaking in their shoes and will find out that real military life is very different from "playing soldier". A great letter about a battle written up in the history chronicles on the war. This regiment, numbering 935 men, was organized on Oct.

6, 1862, and was mustered into the U. 18, to serve for nine months. On the 26th it left the state for Washington, but stopped en route at New York, and was ordered to Fort Schuyler to report to Gen. 26 it was ordered to East New York, and on Jan. 17, 1863, embarked for Fortress Monroe and New Orleans, arriving at the latter place on the 29th.

It encamped at Chalmette, 7 miles below the city, until Feb. 15, when it was ordered to Pensacola, Fla. On May 27, six companies under ol.

Woodman were ordered to Port Hudson, and assigned to Gen. Nickerson's brigade of Dwight's division. They shared in the advance of June 14, and on June 22 assaulted a bastion of the Works, losing 3 killed and 9 wounded. Meanwhile, the portion of the regiment which had remained at Donaldsonville to garrison Fort Butler, was attacked by a vastly superior force of the enemy, but repulsed them with heavy loss in one of the most gallant engagements of the war. The little garrison killed, captured and wounded more than three times its number, and was mentioned for gallantry in general orders read to the troops before Port Hudson.

On July 4, the six companies at Port Hudson were ordered to Fort Butler, then besieged by the enemy, and arrived there on the 5th. Bullen, who had so recently won distinction for his brilliant defense of the fort with his command, was foully murdered by private Francis G. Scott of the 1st La. Owing to a dearth of field officers, Woodward had been retained at Port Hudson.

Arrived at on the 18th, and on the 31st was mustered out at that point. Many of the men had reenlisted while in the South, but all the men captured had been paroled or exchanged, and were then mustered out. I pack up the winni ng orders quickly as I can, we have a packing room all set up for me.

Some days are good, some days are not so good. There are times I cannot manage to pack up the winning orders, so there may be a day or two delay. All the Middle East with the. Sorry this has to be inforced, we no longer can handle the losses. NOTE: If there is advertising below and a web link, this is.

NOT US , and we do not endorse any item that is being offered in those links. We offer only genuine items , no worthless copies or reprints or reproductions. The item "CIVIL WAR SOLDIER LETTER DONALDSONVILLE LOUISIANA 1863 28TH MAINE GREAT BATTLE" is in sale since Tuesday, June 14, 2016. This item is in the category "Collectibles\Militaria\Civil War (1861-65)\Original Period Items\Correspondence, Mail". The seller is "cptkneecap" and is located in North Dighton, Massachusetts. This item can be shipped to United States, to Canada, to United Kingdom, to Germany, to Japan, to Australia.