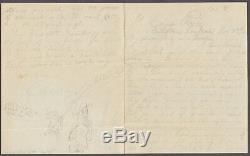 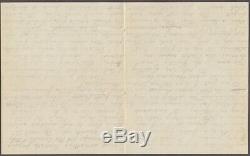 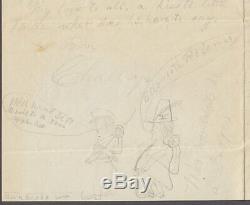 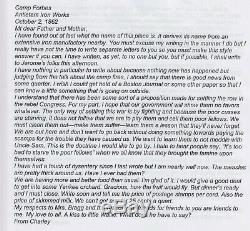 Civil War soldier letter, Charley Henry Howe 36th Mass Infantry, Camp Forbes Antietam Iron Works, October 2 1862, 4 pages with fabulous cartoon soldier art drawn by Howe. In this letter Charley as he is known to his parents, he says from the talk of the camp fires there is some good news, wants a copy of the Boston Journal. Understands there is some proposition to settle the row in the rebel congress, hope our government shows them no favors, the only way of settling this war is by fighting, the poor cusses are starving but why should we consider them poor fellows, we must clean them out and make them suffer, we are out here and don't want to go back without doing something to the scamps for the trouble they have cause us.

We want them to learn not to meddle with Uncle Sam, hate to hear people say its too bad to starve the poor fellows when we all know they brought the famine on themselves, had a touch of dysentery, measles are pretty thick around here, we have had good food lately, I'd love to get into a Yankee orchard, skim milk costs 25 cents a quart if you can get it. On last page, Charley drawn two soldiers as cartoons, one enlisted soldier saying we'll hang Jeff Davis to a sour apple tree, another balloon coming from mouth of an officer, Ellsworth's pet lambs, really fabulous, more great content, comes with a complete transcript. More information on Howe can be seen at Billy Yank and Johnny Reb Letters. Soldier art like this is very very scarce and desirable.

MA 36th Infantry He died of disease as POW on 8/27/1864 at Andersonville, GA He was listed as: POW (date and place not stated) Intra Regimental Company Transfers: from company I to company G Roll of Honor Information: Date of Death listed as 8/27/1864. He was buried at: Andersonville National Cemetery, Andersonville, GA (Grave #7025). Charles Henry Howeknown to all his friends as Charleywas born on 4 May 1845 in Lancaster, Massachusetts. His father worked as a mill hand and struggled to put food on the table for his wife and three boys.

Charley had a limited education and a difficult childhood. He fell in with the wrong crowd, shirked his work and developed a reputation for laziness among the Clintonites. Though he was below the minimum age, Charley begged his parents to let him enlist, hoping to see something of the world and get out from under his parents roof. When they finally consented, he enlisted on 15 August 1862 in Co. Charleys letters are a delight to read and provide a rich, detailed history of the 36th Massachusetts not found elsewhere.

The 36th Massachusetts was also one of the few Eastern regiments that served in both the Eastern and Western Theaters of the war, enabling him to contrast the degree of difficulty in campaigning on the eastern seaboard, the mid- and deep-South. For all Civil War and paper items.

It depends on to what country. We suggest you bookmark it so you can easily come back to our listings at any time. We are a member of the Manuscript Society, the Confederate Stamp Alliance, and life member of the American Philatelic Society. The item "Civil War Soldier Ltr Charley H Howe 36th MA Antietam Iron Works Artwork 10-2-62" is in sale since Monday, December 16, 2019. This item is in the category "Collectibles\Militaria\Civil War (1861-65)\Original Period Items\Correspondence, Mail".