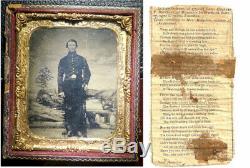 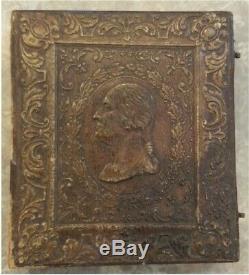 Case is separated at binder. But even more Amazing (which we have NEVER seen before) is the extraordinary provenance in the form of the ORIGINAL Newspaper Obituary of the soldier.

Identified as Charles Bancroft of the 1st Vermont Battery.. Mr Bancroft died at 17 years old from typhoid.. More Civil War Soldiers died from disease then from battle wounds. In 39 years collecting we have never seen an Original Civil War photo tintype with the original obituary like this. The back of the obituary is about civil war deserters and the punishment.