CIVIL War The Sad Story Of A Young Soldier From Maine 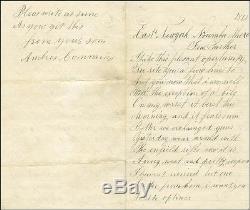 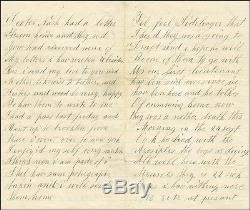 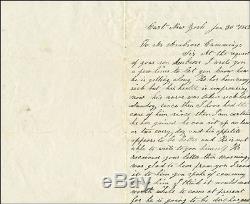 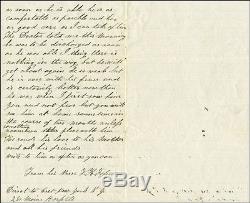 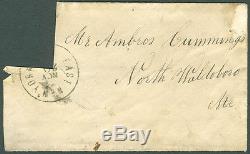 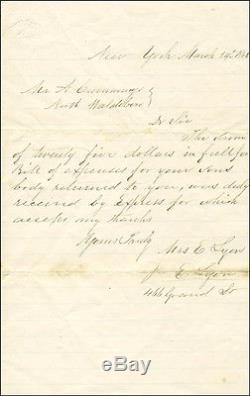 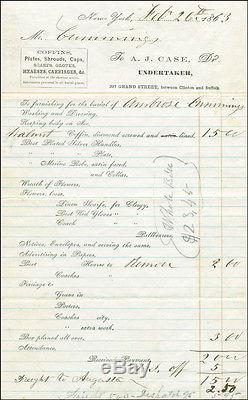 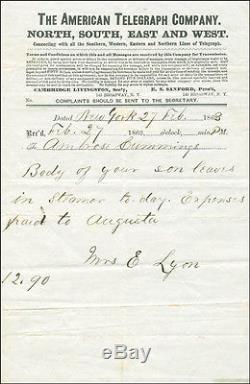 Make an Offer Today and Get a Quick Response! CIVIL WAR: THE SAD STORY OF A YOUNG SOLDIER FROM MAINE - HFSID 287762. CIVIL WAR: UNION - THE SAD STORY OF A VOLUNTEER FROM MAINE Civil War Archive including: new soldier Ambrose Cummings' letter to his father, describing army life; a letter from a fellow soldier, reporting that Cummings is ill but expected to recover; a letter from a New York undertaker sending Cumming's dad a bill for funeral arrangements; and a telegram from the undertaker: the youth's body is on its way home. Collection comprised of: 1 Autograph Letter signed "Ambros Commins" , 4 pages (integral leaf), 3½x6. East New York, 1862 November 20.

It berst this morning and it feals sum better. We was armed with the Enfield rifle now. It is a very neat and pretty weapon.

I haven't received but one letter from hom. I want you to rite oft times. Dexter Nash had a letter from home and they sed you had received none of my letters. I have written 4 besides this.

I send my love to you and mother likewise to brothers and sisters and wood be very happy to hav them to write to me. I had a pass last Friday and went up to Brooklin. From thare I went over to New York.

Co K he died with the arosiples? The boys ar duing all well here with the Measels.

They is 22 sick ones. I have nothing more to rite at presant.

Pleas write as soon as you git this from your son. 2 Autograph Letter signed: F. Fossett, 2 pages (integral leaf), 3½x6. East New York, 1863 January 30. In full: At the request of your son Ambrose I write you a few lines to let you know how he has been getting along.

He has been very sick but his health is improving now. His nurse was taken sick last Sunday.

Since then I have had the care of him. He can sit up an hour or two every day, and his appetite appears to be better and he is not able to write to you himself.

He received your letter this morning, was glad to hear from you. I read it to him. You spoke of coming to see him. I think it would not be worthwhile to come at present, for he is going to be discharged as soon as he is able.

He is as comfortable as possible and has as good care as I can take of him. The Doctor told me this morning he was to be discharged as soon as he is able. I think there is nothing in the way but he will get about again.

He is weak but he is over with his fever and is certainly better now than he was when I first saw him. You need not fear but you will see him at home some time in the course of two months unless something uncommon takes place with him. He sends his love to his Mother and all his friends. Write to him as often as you can. 3 Document, unsigned, 1 page, 5¼x8½. 4 Autograph Letter signed: Mrs.

In full: Body of your son leaves in Steamer to-day. Six horizontal and one vertical fold. The young men of Waldoboro volunteered in several waves between 1861 and 1864 , traveling to Augusta to be organized into volunteer regiments. Most famously, Waldoboro and two neighboring towns filled a company within the ranks of the 20th Maine Volunteer Infantry, immortalized by its heroic stand at Little Round Top, Gettysburg, and in the books and movies Gettysburg and Gods and Generals. 1843 , the namesake and fifth child of Ambrose Cummings, Sr.

Joined the ranks the following year, signing 9-month enlistment papers and joining the 21st Maine Volunteer Infantry on October 25, 1862. His handwritten account, with its request for more letters from home, is included here. Regrettably, the illness afflicting so many of his comrades soon struck Cummings. The letter from fellow soldier F. Fossett describes his condition, and reassures the father that his son is expected to recover.

Such was not the case, however. Cummings was not with them.

His demise was an all too common occurrence in Civil War armies. By war's end, 172 members of the 21st Maine would die, 27 from combat and 145 from disease! For the armies as a whole - North and South - about twice as many soldiers died of disease as from combat injuries. Imagine the public outcry if a family were billed for a son or daughter slain in Iraq or Afghanistan!

Cummings paid the bill promptly. What else could he do? The young soldiers of the 21st Maine were no doubt as patriotic and courageous as those in the celebrated 20th. Perhaps they were as ably led.

But the unhappy fate of a soldier felled by disease may be an even more poignant reminder of the human cost of war than a heroic death on the field of battle. See more material from these signers. Please note that this is an original, authentically signed item. We do not sell copies or reprints. Image(s) shown may contain our company watermark.

The actual document does not contain this watermark. This item has been authenticated and is accompanied by a Certificate of Authenticity issued by our parent company, Gallery of History, Inc.

We financially stand behind them. Ask us about our PSA/DNA and JSA authentication guarantee. Our Third & Best Handbook - The One You Want On Historical Documents!

For the experienced and novice collector and for those who just love learning history this beautiful 253-page hardcover volume is for you! Gallery of History is the world's largest dealer of authentic autographs and manuscripts. Our inventory contains documents in all areas of interest including presidents, royalty, military, aviation, religion, business, science, celebrities, sports, music, authors and more. Whether looking to add to your collection, acquire a unique centerpiece for the home or office, or as a truly one-of-a-kind gift for someone special, you'll find it here at HistoryForSale. Founded in 1981, is a long-standing UACC Registered Dealer, #RD110, and is a long-standing member of the Manuscript Society. The Gallery of History is the largest dealer in the world with an available inventory that exceeds 200,000 rare autographs and manuscripts. Preserving historical documents is important to us.

Our unframed items are sent to you either in acid-free Mylar. Sleeves or have been encapsulated in acid-free Mylar. Our framed items are encapsulated in Mylar to guard against organic acids, mounted in an acid-free enviroment and are framed behind UF3-AR Plexiglas which blocks out approximately 94% of the ultraviolet light. We warrant to the original purchaser for a period of ten (10) years from the date of the sale the authenticity of any autograph offered by HistoryForSale.

Gallery of History is not liable for any other damages, including consequential damages. There are no other warranties of any nature either expressed or implied, including but not limited to the warranties of merchantability and fitness for a particular purpose.

The item "CIVIL WAR THE SAD STORY OF A YOUNG SOLDIER FROM MAINE" is in sale since Tuesday, June 28, 2016. This item is in the category "Collectibles\Autographs\Historical". The seller is "historydirect" and is located in Las Vegas, NV. This item can be shipped worldwide.