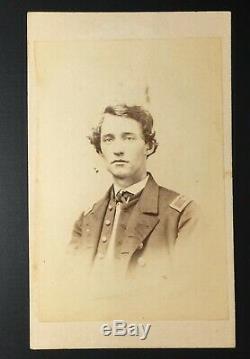 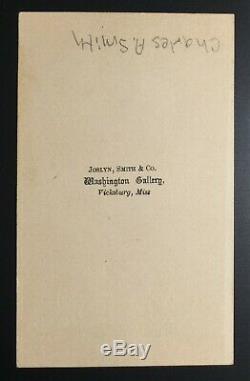 We are offering a CDV photograph of Civil War Union Soldier Charles A. Smith, 49th Regiment of Infantry, Massachusetts Vols. Photo is by Joslyn, Smith & Co. Smith was born in Hadley, Massachusetts. At the age of 21, he enlisted in the 10th Regiment of Infantry, Mass. Company and went into service on June 21st, 1861. While the regiment was camped at Medford, he became sick with measles and was discharged from service.

After he recovered, he re-enlisted at Springfield into Company K of the same regiment. During the siege of Yorktown, Virginia he became severely sick and was discharged again. In the autumn of 1862, he enlisted in the 49th Regiment of Infantry, Mass. The 49th went into camp for organization at Pittsfield, Massachusetts, and received marching orders on November 21st, 1862 to report in New York to General Andrews. On arriving there, they were sent to camp on Long Island, NY.

On July 9th, 1863 the 49th was sent with two brigades to Donaldsville. On the 13th of July, they marched in Bayou Lafourche where they were nearly cut off by a major force. By making a circuit of three miles, they succeeded in joining the rest of the forces.

We believe the photograph was taken in Vicksburg, Mississippi right before he left for home via the Mississippi River, arriving in Pittsfield on August 21st, 1863. The item "CIVIL WAR UNION SOLDIER CHARLES A. I" is in sale since Saturday, September 28, 2019. This item is in the category "Collectibles\Militaria\Civil War (1861-65)\Original Period Items\Photographs".

The seller is "propicker" and is located in Santa Clarita, California. This item can be shipped worldwide.