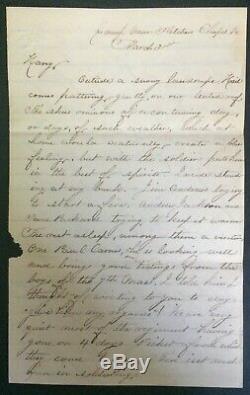 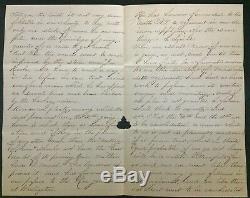 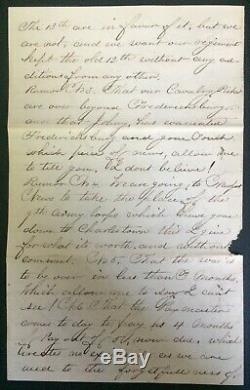 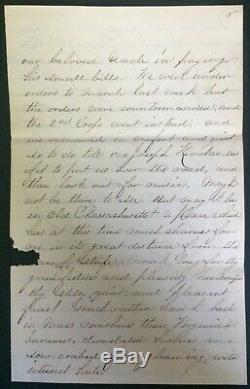 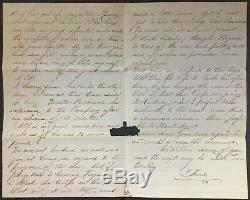 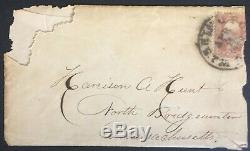 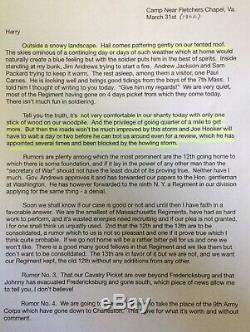 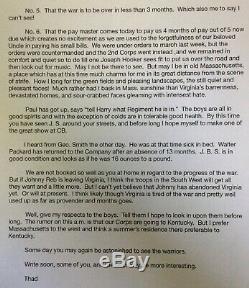 Outstanding Union soldier's letter datelined Camp Near Fletchers Chapel VA, March 31st. Written and signed by Thaddeus Keith, 12th Massachusetts Infantry, Co. With original mailing envelope with an 1862 cancel. The letter reads in part. We are very quiet, most of the Regiment having gone on 4 days picket from which they came today. There isn't much fun in soldiering.

To tell you the truth, it's not very comfortable today with only one stick of wood on our woodpile. And the privilege of going quarter of a mile to get more.

But then the roads won't be much improved by this storm and Joe Hooker will have to wait a day or two before he can trot us around even for a review, which he has appointed several times and been blocked by the howling storm. Rumors are plenty among which the most prominent are the 12th going home to which there is some foundation.. Soon we shall know if our case is good or not and until then I have faith in a favorable answer. We are the smallest of Massachusetts Regiments, have had as hard work to perform, and it's wasted energies need recruiting and if our please is not granted, I for one shall think us unjustly used. 2nd that the 12th and 13th are to be consolidated..

That our Cavalry Picket are over beyond Fredericksburg and that Johnny has evacuated Fredericksburg and gone south, which piece of news allow me to tell you, I don't believe. We are going to Crewfort Chews to take the place of the 9th Army Corps which have gone down to Charleston. This I give for what it's worth and without comment. 5 That the war is to be over in less than 3 months.

Which also me to say I can't see! 6 That the paymaster comes today to pay us 4 months of pay out of 5 now due, which creates no excitement as we are used to the forgetfulness of our beloved Uncle in paying his small bills. We are under orders to march last week, but the orders were countermanded and the 2nd Corps went instead, and we remained in comfort and quiet so to do till one Joseph Hooker sees fit to put us over the road and then look out for music. May I not be there to see. But may I be in old Massachusetts Much rather had I bask in Mass.

Sunshine than Virginia barrenness, devastated homes, and sour-crabbed faces gleaming with intensest hate.. We are not booked so well as you at home in regard to the progress of the war. But if Johnny Reb is leaving Virginia, I think the troops in the South West will get all they want and a little more. But I can't yet believe that Johnny has abandoned Virginia yet.

I think likely though Virginia is tired of the war and pretty well used up as far as provender and months goes.. Keith was a 28 year old farmer from North Bridgewater Mass when he enlisted on June 25, 1861. He was captured at Gettysburg and after being exchanged, was killed in battle on the second day of The Battle of the Wilderness May 6, 1864. The item "Civil War Union Soldier's Letter 3/31/1862 re life as a soldier in VA in 1862" is in sale since Monday, October 7, 2019. This item is in the category "Collectibles\Militaria\Civil War (1861-65)\Original Period Items\Other Civil War Original Items".