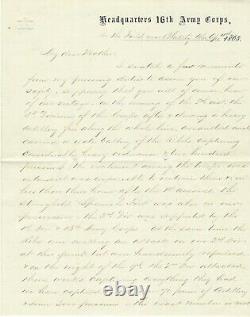 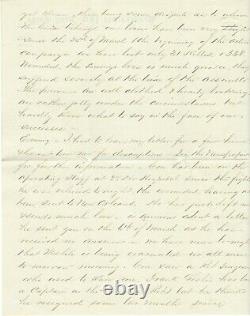 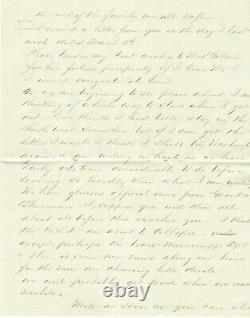 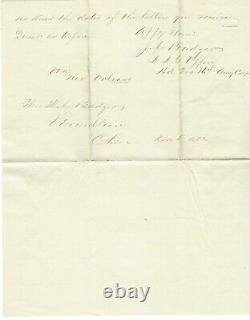 The Battle of Fort Blakeley, fought on April 9, 1865, was the climax of the Union military campaign during the Civil War aimed at capturing the city of Mobile, the last major port that remained in Confederate Hands. The battle took place at the site of Fort Blakeley, an earthen Confederate fortification about six miles north of present-day Spanish Fort in Baldwin County. In it, some 16,000 Union troops fought against approximately 3,500 Confederates, with the Union gaining a decisive victory and taking the city of Mobile soon after. Offering a fine War-date Autograph Letter Signed by Union officer, J. Army Corps on the staff of General A. Smith, 3-1/2pp, 7 ¾ x 9 ¾, April 11, 1865, "In the Field near Blakely Ala", on printed "Headquarters 16th Army Corps" letterhead pertaining to the battles at Fort Blakely and Spanish Fort. On the evening of the 8th inst. The 3rd Division of this Corps after & during a heavy artillery fire along the whole line, assaulted and carried a water battery of the Rebels, capturing considerable heavy ordnance & two hundred prisoners. The excitement among the troops was intense. It was impossible to restrain them & in less than three hours after the 1st assault the stronghold'Spanish Fort' was also in our possession.

Was supported by the 1st Div & 13th Army Corps. At the same time the Rebs were making an attack on our 2nd Div at this point, but were handsomely repulsed, & on the night of the 9th the 2nd Div attacked their works capturing everything they had. We have captured in all over 70 pieces of Artillery & some 3000 prisoners - the exact number is not yet known, there being some dispute as to whom the honor belongs. Our losses have been very slight since the 25th of March, the beginning of the active campaign.

They suffered severely at the time of the assaults. The prisoners are well clothed & hearty looking, and rather jolly under the circumstances, but hardly know what to say in the face of our successes... Con has been on the operating staff at 2. The wounded having all been sent to New Orleans...

We have news tonight that Mobile is being evacuated... We have glorious official news from Grant & Sherman, I suppose you will know all about it before this reaches you - I think the CSA are about to collapse - except perhaps the trans-Mississippi Dept.

There is some new news along our lines for the men are cheering like devils Folds, else VG to Fine. Rare account of these two engagements. Our goal is to please every customer. The item "Civil War Union Soldier Tells Of Battle Victories At Fort Blakeley, Spanish Fort" is in sale since Friday, July 10, 2020.