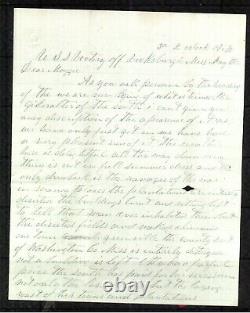 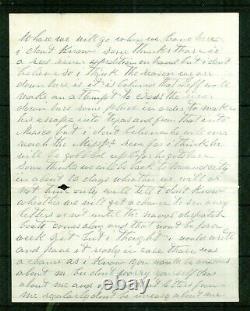 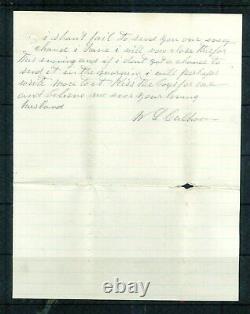 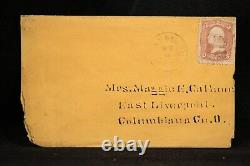 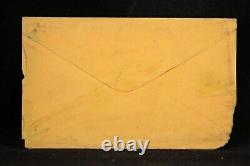 Three page letter + cover to Mrs. Maggie Calhoon in East Liverpool, Ohio light Vicksburg CDS. The letter is not dated, but it is late in the war. He writes in pencil about the ravages of the war, the plantations are abandoned, buildings burnt, the county seat of Washington County, Mississippi is entirely destroyed, not a building is left. He believes they are down there for the reason that Jeff (Davis) will attempt to cross the river and go to Texas then to Mexico, but he does not think he could make it that far.

The cover with wear, the letter has a tear on a fold and missing 2 small pieces I have tracked this soldier to William K. Calhoun from the Ohio 173rd Infantry. Victory was one of the lightly armor-plated gunboats of the Mississippi Squadron called "tinclads" which were used during the Civil War for shallow water patrol and reconnaissance duty on the Tennessee, Ohio, and Cumberland rivers.

On the day of Victory's commissioning, 8 July, Confederate General John Hunt Morgan crossed the Ohio River into Indiana at the head of a 2,460-man raiding party. From the 10th to the 19th, Victory, Moose, Reindeer, Springfield, Naumkeag, and Allegheny Belle chased Morgan as he proceeded eastward along the river. Union cavalry ashore prevented him from recrossing the Ohio River to safety in the South. While Victory and three of the gunboats remained scattered downstream on the 19th to prevent the raiding party from doubling back, the Federals finally trapped Morgan at Buffington Island and forced him to attempt a crossing. The try failed miserably, and most of the Confederates surrendered.

Morgan, himself, escaped with a few followers only to be caught near New Lisbon, Ohio, one week later. Victory remained with the Mississippi Squadron for the duration of the war, performing patrol, reconnaissance, convoy, and dispatch duty. On 14 April 1864, she helped to repulse a raid upon Paducah, Kentucky; andon 4 November, as part of a squadron of six gunboatsaided the successful defense from a carefully staged attack on Johnsonville, Tennessee, led by the famed Confederate cavalryman, Lt. She was documented as Lizzie Tate on 7 October 1865 and was reduced to a barge on 22 November 1867.

At this time, her service afterword is unknown. And it will take you to our store where covers are broken down by category.

GUARANTEED TO BE OLD & ORIGINAL & GENUINE. P L E A S E W A I T F O R U S T O C O M B I N E A L L P U R C H A S E S I N B I L L IN G. The item "Civil War USS VICTORY 1860s Cover Soldiers Letter Written On Ship off Vicksburg" is in sale since Thursday, August 29, 2019. This item is in the category "Stamps\United States\Covers\Postal History". The seller is "covercrazy2" and is located in Rindge, New Hampshire. This item can be shipped worldwide.