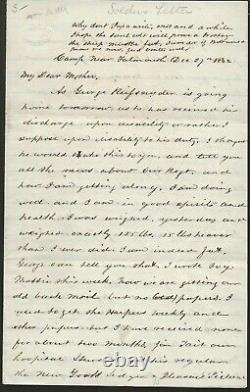 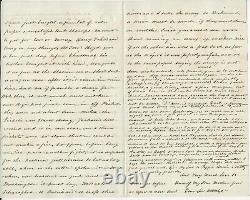 3 Page in ink letter from possibly a W A Whyte or N A Whyte, just before the battle of Fredericksburg, discussing interesting things in late 1862, other than camp news, he talks about being on Picket 14,000 strong as Jackson has gotten in their rear, and the pickets were so close they could not make a fire, and is expecting another fight soon, as the Northern Politicians will not let them lay around, talks about Halleck telegraphing instructions to Burnside's Corp to cross the river and take the army to Richmond saying a move must be made even if on crutch's? Something about the papers saying the army would be disbanded, talks about seeing a doctor who he might be working with, sounds like he might be a hospital steward?

The item "Civil War War Soldier's letter Camp Near Falmouth VA 12/27/62" is in sale since Wednesday, June 23, 2021. This item is in the category "Collectibles\Militaria\Civil War (1861-65)\Original Period Items\Correspondence, Mail". The seller is "civil_war_photos" and is located in Midland, Michigan. This item can be shipped worldwide.