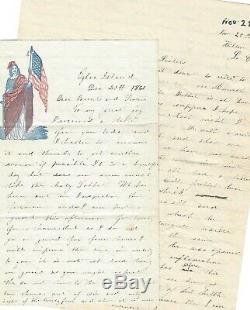 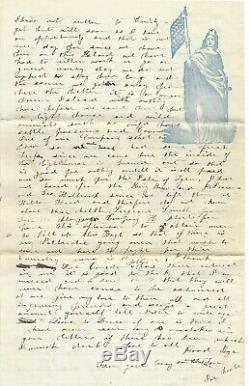 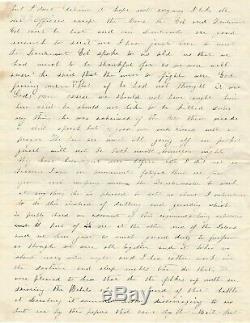 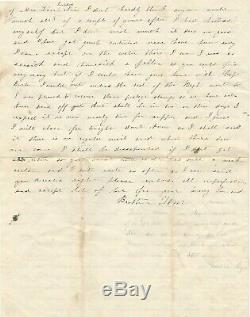 Infantry was organized on September 13, 1861 and mustered out on July 20, 1865. It was involved in a number of battles, including Olustee, James Island, Drewrys Bluff, Chaffins Farm, Fort Wagner, Second Battle of Fort Fisher, Siege of Petersburg, Battery Wagner and Siege of Fort Pulaski. ELLIOTT enlisted as a Private on September 6, 1861. He was wounded on July 11, 1863, at Fort Wagner, SC and mustered out on September 12, 1864. Offering two ALSs, 8 pp total, 7 ½ x 10, 5 x 8, both to his parents and sisters.

Highlights of the letter include discussion of the Union losing the battle at Leesburg, claiming that when he heard about it, It sounded rather discouraging to us. Leesburg was a prosperous Southern town, which divided the United States from the Confederate States. By wars end, Leesburg changed hands about 150 times and suffered from frequent raids, combat in the streets and the disintegration of civil authority.

[Research included] Elliotts second letter is written from Tybee Island, at the mouth of the Savannah River, GA. Here Elliotts regiment spent the entire winter erecting masked batteries for the reduction of Fort Pulaski. This was an arduous task, owing to the swampy nature of the soil and proximity to the fort, which forced the men to work on the batteries only at night, while the days were devoted to landing artillery and ordnance stores two miles down the beach beyond the range of rebel guns. Hilton Head, SC, November 28, 1861, You will probably hear of Sylvester Weeks death which was sincerely mourned by us all and especially by the Company to which he belonged.

He was the Lieutenants waiter and has not behaved like the same fellow that he did at homeHis disease was pronounced inflammation of the lungs. Burton has before this reached home. It was hard to see him goI like all our officers except the major.

The Col and Lieutenant are good enough to suit me. I have just been to meet the Lieutenant. Colonel spoke to us, told us that we had much to be thankful forthat the men to fight were God fearing men and that if he had not thought it was Gods own cause, we should not have caught him here. He said he should not like to be killed doing anything he was ashamed of. The Rev then made a short speech but a good one and closed out with a prayer.

The boys are most all going off in picketwill not be back until tomorrow nightThere are paid from each company, under the quartermaster, to work at anything he is pleased to set us about. I volunteered to do this instead of drilling and guarding which is pretty hard on account of the regiments being separated. Part of it are at the other end of the island and we have just as much guard duty to perform as though we were all togetherI had rather work in the daytime and sleep nights than do that. We are pleased to hear that the folks up north are driving the Rebels.

I think that they made a mistake when they removed Fremont Lincoln removed Fremont for insubordination. But as for (Winfield) Scott, Im glad he has one. We are all well, that is for soldiers, but what a Thanksgiving we had this morningThe soil is pretty deep and there is not a stone to be found. The other day 19 of us dug a well. It was twenty feet deep and we found nothing.

Tybee Island, [GA], December 29. We do not expect to stay here long and the sooner we get away from here, the better. It is a barren island with nothing herebut a lighthouse and wild animals, such as wild hogs, cattle, possums and coons. One of our company shot a cow so we have had some fresh beefSergeantfromCompany H startsthis afternoon to obtain men to fill up this Regtso if there is any patriotic young men that wish to come out here to fight for their country nerve is thy name. A couple of fold tears reinforced with archival tape. Punctuation added in transcription for clarity. Our goal is to please every customer. The item "CT 7th Civil War Soldier Writes Fremont Removed, North Driving Rebels-2 Letters" is in sale since Friday, November 8, 2019. This item is in the category "Collectibles\Militaria\Civil War (1861-65)\Original Period Items\Other Civil War Original Items".