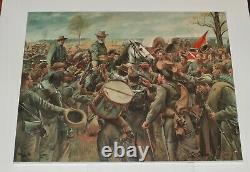 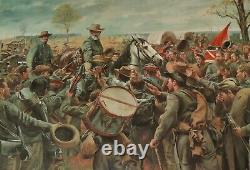 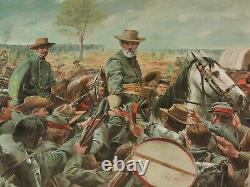 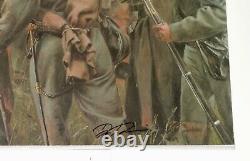 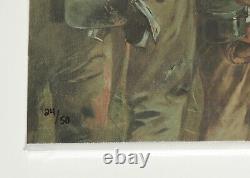 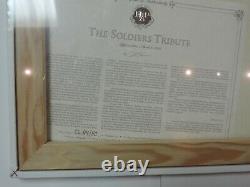 (WE ARE AN AUTHORIZED DON TROIANI GALLERY). Lee's Return from the McLean House. Having surrendered the Army of Northern Virginia, General Lee rode back toward his headquarters tent through a cool and dark Palm Sunday evening.

The sun behind the clouds had slanted near the horizon; sunset in Richmond that night came at 6:24 (Americans did not begin observing Daylight Savings Time until 1918). A chaplain present with the army described the weather: The morning had been bright and fair.

By noon dark and gloomy clouds had gathered over the whole face of the sky. From a distance of a half-mile, General Edward Porter Alexander saw Lee coming out of the village on his familiar gray "Traveller" at about 4:30 p. Lieutenant Colonel Charles Marshall, Lee's reliable 34-year-old aide, rode beside his chief. "A strong desire seized me, " Alexander wrote, to have the men do something, to indicate to the general that our affection for him was even deeper than in the days of greatest victory & prosperity.

Under orders from Alexander and his subordinate officers, artillerymen hurried to the roadside and formed into line. Alexander instructed them "to uncover their heads, but in silence, " as Lee passed. The hastily formed plan for a dignified, if emotional, tribute to the surrendered army's chieftain fell apart at once. Infantry posted nearby swarmed around the artillerists and as Lee drew nigh, some one started to cheer, & then, of course, all joined in. " When he could be heard, the general "told the men in a few words that he had done his best for them & advised them to go home & become as good citizens as they had been soldiers. During General Lee's short, simple remarks, a wave of emotion seemed to strike the crowd & a great many men were weeping. " Soldiers pressed close to touch the general or his mount, "to try & express in some way, " General Alexander wrote, "the feelings which shook every heart. A South Carolina surgeon who had served under Lee for most of the war described the moment in a contemporary letter to his wife: I heard some of our men yelling, and saw General Lee and his staff riding towards us, and as he stopped the men crowded around him to shake his hand and every man was shedding tears.

" Another observer used comparable language: "The men flocked round General Lee and met him with shouts and tears. A North Carolinian standing "on the road side nearest the Court House" left a similarly vivid description of the event: As he approached we could see the reins hanging loose on his horse's neck and his head was sunk on his breast. As the men began to cheer, he raised his head and hat in hand passed by, his face flushed and his eyes ablaze.

Private John Mathews Brown had been attending Washington College in Lexington, Virginia, when war erupted. In March 1862, two weeks after his seventeenth birthday, he enlisted in the Rockbridge Artillery. Brown served steadily with that renowned battery, except when absent sick and while recovering from a wound he suffered at Malvern Hill. At Appomattox on the evening of April 9, 1865, Brown went to the edge of the road when he heard a commotion, and saw Lee riding through a dense crowd of soldiers. The general stopped in the midst of the throng and spoke briefly, out of Brown's hearing.

Someone later told the Rockbridge gunner that Lee had admonished the men that the bravest and best thing you can do is to go to that wife who is waiting anxiously for youâ¦. " Then, "as he approached where I stood, " Brown recalled, "every head was baredâ¦.

General Lee's eyes were full of tears, as he turned his face from side to side and looked on the bowed heads of his men. The next morning, Colonel Marshall found some privacy in General Lee's ambulance, with an orderly posted to deflect interruptions, and drafted in pencil one of the most famous documents in American military history. 9, signed by Lee, began: After four years of arduous service marked by unsurpassed courage and fortitude the Army of Northern Virginia has been compelled to yield to overwhelming numbers and resources. There remained nothing for the weary Confederates to do but wend their way to desolated homes and begin the daunting task of rebuilding. Charles Marshall practiced law in Baltimore. Porter Alexander built railroads in Georgia. Brown raised oranges near Tampa. Lee grew into a towering American legend. This is a beautiful collectible limited-edition Print. Hand Signed & Numbered Personally By Don Troiani. Stretched Size Is About ------ 31 34" x 24 1/2". Canvas Number Is ---- 24 / 50. STORED FLAT & PROTECTED & NEVER FRAMED.