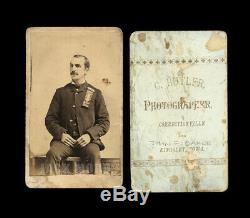 The writing on the badge is clearly readable under magnification, it says, IN MEMORIAM / WM. Here is a long bio of William Baker, from online. The Peoples Press [Mapleton, Iowa] 28 July 1881 Page 1: IN MEM0RIAM. At Correctionville, Woodbury County, Iowa, July l5th, 1881, of typhus fever, William Baker, aged sixty-four years.

The deceased was born in Ohio, March 6, 1817, when, during the course of his boyhood, he removed with his parents to Indiana, where he grew to manhood. In 1839 he was united in marriage with Mrs. Nancy Thompson, the fruits of the alliance being four sons and two daughters, all of whom with the exception of two, passed to the Beyond some years ago. On the breaking out of the California gold excitement in'49, Mr.

Baker, in company with a number of other daring spirits, was among the first to explore the newly discovered Eldorado. During his residence in California, war's rude alarm pealed forth the sound that Fort Sumpter had been fired on.

Possessed of the highest sense of patriotism to his country and his flag, Mr. Baker at once enrolled himself as a member of Co.

B, Third California Infantry, and leaving San Francisco for the front, gallantly bore his part as a private soldier until the expiration of his term of enlistment. Where he remained until 1868, when he removed to Iowa, settling at Correctionville, where he continued to reside up to the time of his death. Father Baker was a man of strong conscience, and deep feeling from which spontaneously flowed manly sympathy for the poor and the oppressed.

Reared in a State where the "Underground railroad" flourished for years, his hand and heart knew no bounds in seeking to liberate enslaved humanity, and throughout his career, sought to inculcate the noblest moral teachings of the Master at all times. He was a worthy member of the I. And had but a short time before his death, taken steps preparatory to the organization of a lodge at Correctionville. He was buried on Saturday the day following his death, funeral services being held in the shade of a number of grand old trees in front of his home, under whose pleasant branches he had so often loved to linger at the close of setting day, while he communed with nature.

His remains were borne to their last resting place by a large number of friends and acquaintances and tenderly laid to rest in the cemetery at Correctionville. A widow and two children, J. Baker, of this place, and Mrs. Arminda Denny, of Correctionville, survive his loss.