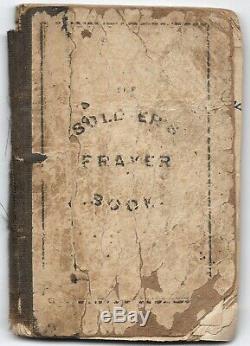 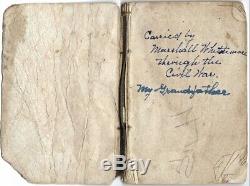 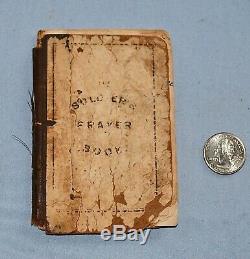 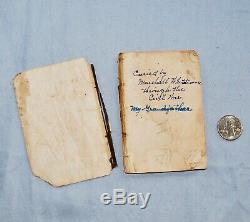 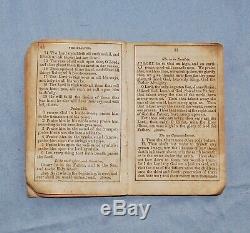 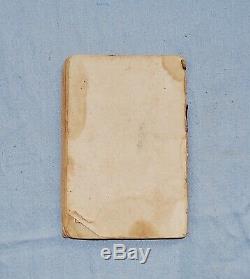 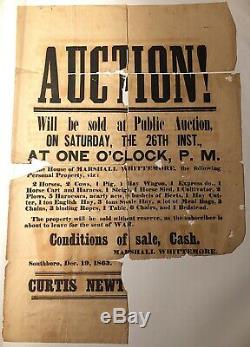 The book is fragile, especially the cover which has now separated. It is NOT part of the collection or this sale! Here's his story:-Marshall Whittemore, born on August 27, 1823 in Hebron, Maine to Seth and Allethea Whittemore. He was the oldest of six children, five boys and one girl. Marshall worked on his fathers farm until he left for Massachusetts around the mid 1840.

Once there, he would settle a farm in Southborough and marry Nancy C. Walkup on March 20, 1849.

They would have three children and lived together with Nancys mother, Esther. In early December, 1863 and after almost three years of war, Marshall decided to enlist. He couldnt just leave his family alone in the middle of winter, though.

On January 2, 1864, he enlisted with Company D of the 2nd Massachusetts Heavy Artillery. He was on duty at Fort Macon & New Bern, North Carolina and Plymouth, Virginia from January 1864 to March 1865. He survived the Battle of Newport Barracks, North Carolina after being over by Confederates on February 2, 1864.

A, E, & H and attached 1st Brigade, 1st Division, District of Beaufort, N. This unit was engaged at the Battle at Southwest Creek, North Carolina; March 7, 1865; Battle of Wise Fork, North Carolina; March 8-10, 1865; and the occupation of Kinston, North Carolina; March 14, 1865. In June, 1865 the regiment concentrated at New Bern, North Carolina and was placed on duty around Wilmington at Fort Fisher, Caswell and Smithville. He was mustered out on September 2, 1865 in Boston, Massachusetts and went home to his family. He continued to live on his farm with his wife until he died due to heart failure on April 30, 1902.

I apologize for any inconvenience. If you place your order before 1p. (EST), then I will have it on its way to you that day. If you are unable to pay within the 5 days, please, please, please contact me and let me know.

If you have any questions. Please feel free to contact me! Thanks again for your interest and as always HAPPY HUNTING! The item "Identified Civil War Soldier's Prayer Book 2nd Massachusetts Heavy Artillery" is in sale since Thursday, August 1, 2019. This item is in the category "Collectibles\Militaria\Civil War (1861-65)\Original Period Items\Documents".