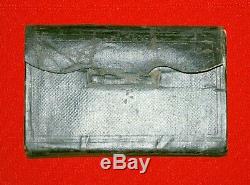 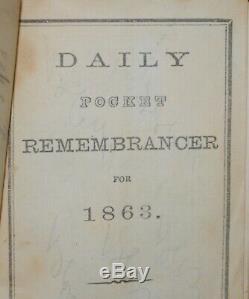 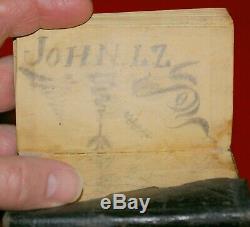 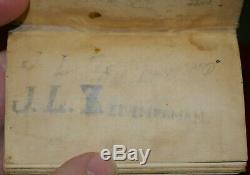 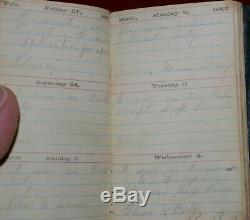 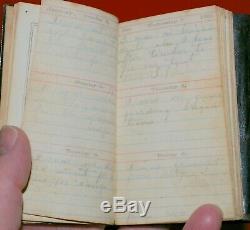 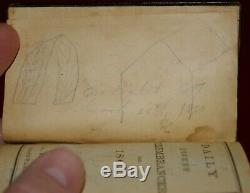 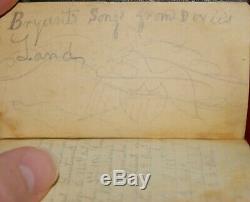 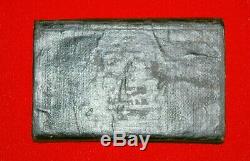 IMPORTANT 1863 DIARY FROM JOHN L ZIMMERMAN, CO. I decided to make a point of this offering. I doubt they will respond but I want to take this moment to show they could have had their chance, and now that opportunity has passed.

Over 20 years ago I obtained at a CIvil War show this 1863 diary of John L Zimmerman, Co. I would rate the condition of the diary as VG+, perhaps even better.

Some of the diary text is light but can be read; and as the entries are in pencil, there can be pages Xeroxed with darkened image without affecting the text. This diary has two particularly interesting aspects. As can be seen from above images, in addition to the diary text, are some great folk art images by John Zimmerman.

He shows his name in colorful script; sketches being "on picket"; and in an interesting but curious caption, also penciled in "Bryant's Song From Dixie's Land" to include a pencil drawing of an eagle. Like any diary, this one is a time capsule of a soldier at war. There are mundane aspects of any soldier at camp or in the field, as well as diary entries covering millitary action.

8: "I was on guard guarding brigade trains". January 18: "I was out on inspection of arms".

January 20: We broke camp and went on the march for the Rappahonnock. 5: I was on guard... 26: "I was on no kind of duty our cavalry was driven in". March 4: "I was on review by General Humphreys also on Dress Parade". Friday April 3: "The 5th Army Corps was reviewed by Major General Meade". Monday April 6: I was on picket about 12 o'clock... Brigade for to be reviewed by the President of the U. Monday April 13: I volunteered to go on a reconnaisance for five days at Staffords Ford. Sunday April 19: I was still at the same place there was two rebs came across the river to where I was guarding. Monday April 27: "I was on the march to meet the rebs".

This was the last diary entry. On May 3, John Zimmerman was seriously wounded in the left arm during the Battle of Chancellorsville.

International mailing cost is based on destination. As collectors know, there is an immediacy about diaries that usually cannot be duplicated, even by letters. Diaries easily fit into pocket or haversack and were easy to jot down notes, reflections, etc. They were often recorded the day the event takes place, while letters may be written days later. And in this case, John Zimmerman is recording hearing cannon fire and moving towards battle. Of additional appeal is the fact that John Zimmerman indulged his artistic whims with several interesting drawings. This will make a fine addition to a Civil War collection in general, and a collection focusing on paper items: diaries or letters, in particular. The item "IMPORTANT 1863 CIVIL WAR DIARY SOLDIER WOUNDED CHANCELLORSVILLE BATTLE" is in sale since Saturday, March 2, 2019.