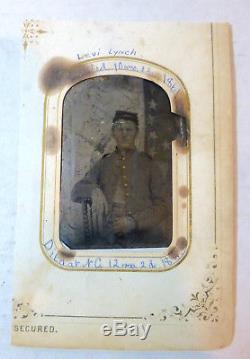 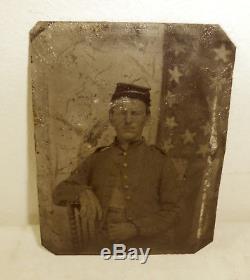 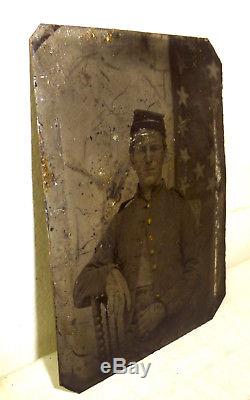 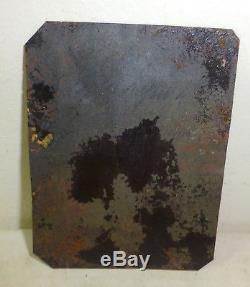 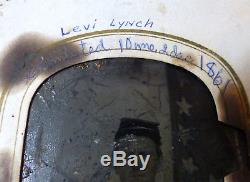 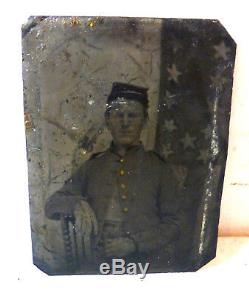 You are purchasing an original tintype from a photo album of photos from Peru, Indiana. SUBJECT: A handsome young soldier named Levi Lynch poses for a photo in a studio. He appears to be around 20 years old.

He is a Union soldier in his uniform. His jacket has hand-colored brass buttons that is only buttoned at the top.

He sits on a wooden chair with his right arm resting on the armrest. Behind him is the American flag with 11 stars showing. It's hard to tell how many stars are actually on the flag since it is partially obscured. It is VERY rare to have the flag in Civil War portrait photos. It's also rare to have the soldier identified.

Lynch was part of the Indiana 46th regiment. CAPTION: This was cut out of a family photo album, which a family member wrote the length of time Lynch was enlisted (10 months, 2 days from 1861) and when he died Died at N. 12 months, 2 days, 1863.

However, the location of his death is conflicting. According to a book "History of the Forty-Sixth Regiment Volunteer Infantry: September 1861- September 1865", Lynch Died at New Orleans, La. December 2, 1863, of wounds received at Champion's Hill, Miss. Lynch's name also is written on the back in pencil.

SIZE: 3.25 by 2.5 inches. CONDITION: All four corners are clipped. There is a scratch on Lynch's forehead. There is bubbling in the emulsion from a poor job developing the image by the photographer. There is a slight bend from top to bottom.

There is a light oval mark right in the center. It likely is from a photo in the album on the facing page that was pressed against his tintype for 150 years. The paper surrounding the tintype has burn marks. Check out my store for more photos, books, autographed cards and game-used ticket stubs by clicking the "Mitten State Sports" link above.