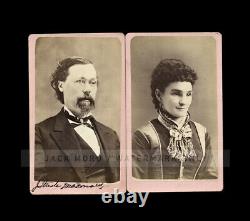 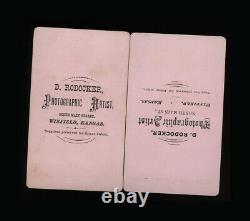 McDonald was a prominent lawyer in Kansas and California, he also ran for Congress in Kansas around the time this photo was taken. He served in the Civil War, 20th Illinois Infantry, and was severely wounded in action, later receiving the Congressional Medal of Honor. See below for more info found online.

Both CDVs are approximately 4" x 2.5" and in very good or better antique condition. The imprint on the woman's CDV is upside-down. Civil War Congressional Medal of Honor Recipient.

He entered the Union Army at Waynesville, Illinois and served as a Private with Company E, 20th Illinois Volunteer Infantry. His Medal of Honor action occurred April 6, 1862 at Pittsburg Landing, Tennessee. His citation (issued August 27, 1900) reads: Was severely wounded while endeavoring, at the risk of his life, to carry to a place of safety a wounded and helpless comrade.

Winfield Courier, August 26, 1880. It is said that in the Wichita convention someone stated that J. Wade McDonald was a soldier in the rebel army, and that in response one delegate stated that he would vote for a rebel soldier full as soon as for a union soldier, and another said that he questioned the democracy of any man who would oppose a man because he wore the grey. Now, we do not propose that his friends shall be allowed to make capital for him among Democrats by making them believe he was a rebel soldier and killed Republicans. We boldly assert that such is not the case, but that J.

Wade McDonald was a soldier in the Twentieth Illinois infantry, a regiment whose preserved banner is emblazoned with the names of Fredericktown, Fort Donelson, Shiloh, Corinth, and Vicksburg; that he killed Democrats, that he was discharged from service on account of wounds received, and that he still carries rebel lead in his thigh. We don't believe he will be a popular candidate with his party. This item is in the category "Collectibles\Photographic Images\Photographs". The seller is "jack_mord" and is located in this country: US. This item can be shipped worldwide.