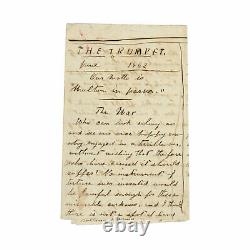 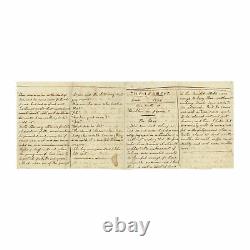 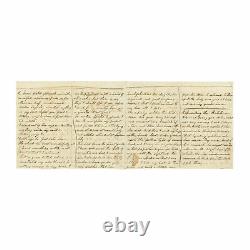 This clever little handwritten pamphlet, arranged in the style of a newspaper and found among a group of 6th Vermont soldier letters, was written by a soldier who had seen enough of war. Titled The Trumpet, it is dated June 1862 and carries the motto multi in parvo (much in little). Under the very newspaper-like headline The War, the author editorializes. Who can look calmly on and see our once happy country engaged in a terrible war without wishing that the few who have caused it should suffer?

No instrument of torture ever invented would be painful enough for their miserable carcasses, and I think there is not a spot of land in the United States mean enough to bury them without making Uncle Sam sick to his stomach. But the present war will in time cause such to be cleared out and put down, and then I hope that our country will be more careful in the future, and when a traitor shows his head north or south, he will suffer immediately and not cause another war.

In the next section, the author relates a fictional story of a sentry exchanging words with the rebel hes just killed. After asking the sentry if there was anything in his head, the rebel says That is your bullet, which has penetrated my skull, and is rolling around in my brain. I die happy, and with an empty stomach; but there is one thing I should like to see before I perish for my country. Have you a quarter about you?

A joke about receiving quarter then follows. The third and final section, called Expanding on the Bible, is another clever joke, having to do with a soldiers response to a reading from the Book of Job. The small 4 x 6 1/4 pamphlet opens up to 15 1/2 x 6 1/4 with four panels on each side. Excellent condition with light foxing and toning.

The Secesh picket approach me with an awful expression of woe on his otherwise dirty countenance. Soldier, says he, was there anything in my head before you fired? Nothing, says I, save a few harmless insects.

I speak not of term says he. Was there anything inside my head? Well says he, just listen now. He shook his head mournfully and I heard something rattle in it.

That is your bullet, which has penetrated my skull, and is rolling around in my brain. Too much affected to speak. I drew the coin from my pocket and handed it to him. The dying man clutched it convulsively, and stared at it feverishly. This, said he, is the first quarter I have seen since the fall of Sumter, and had I wounded you I should have been totally unable to have given you any quarter. How bright, how exquisite, and good for four drinks!

But I have no time to say all I feel. The expiring soldier then laid down his gun, hung his cap and overcoat on a branch of a tree, and blew his nose.

And there I stood, my boy, on the lonely beat, looking down upon the fallen type of manhood, and thinking how singular it was he had forgotten to give me back my quarter. The sight and the thought so affected me that I was obliged to turn my back to the corpse and walk a little way from it.

A learned pedagogue at Nantucket used every morning to read passages in the Bible, and expand the same as he proceeded, in order that by asking questions as to how much they remembered of his comments he might ascertain who were the bright boys of the school. On one occasion he read from the book of Job thus.

There was a man in the land of Uz, and his name was Job, who feared God and eschewed evil. Eschewed evil: that is, eschewed evil as I do tobacco, he would have nothing to do with it. With this very clean and forcible elucidation of the word eschew, he proceeded, and a number of verses were read and commented on in a similar manner. After a long interval when the young mind had time to digest its food, the pedagogue called upon one of the youngest boys, and the following dialogue ensued. Who was the man who lived in Uz? Was he a good man? He chewed tobacco when nobody else would have anything to do with it was Bob Holmess answer. The boy was permitted to take his seat. Please see my other items for more original Civil War items. The item "June 1862 Civil War Soldier's Handwritten Pamphlet / Newspaper THE TRUMPET" is in sale since Monday, November 1, 2021. This item is in the category "Collectibles\Militaria\Civil War (1861-65)\Original Period Items\Correspondence, Mail". The seller is "iron-horse-sales" and is located in Champaign, Illinois. This item can be shipped to United States, Canada, United Kingdom, Denmark, Romania, Slovakia, Bulgaria, Czech republic, Finland, Hungary, Latvia, Lithuania, Malta, Estonia, Australia, Greece, Portugal, Cyprus, Slovenia, Japan, China, Sweden, South Korea, Indonesia, Taiwan, South africa, Thailand, Belgium, France, Hong Kong, Ireland, Netherlands, Poland, Spain, Italy, Germany, Austria, Bahamas, Israel, Mexico, New Zealand, Philippines, Singapore, Switzerland, Norway, Saudi arabia, Ukraine, United arab emirates, Qatar, Kuwait, Bahrain, Croatia, Malaysia, Chile, Colombia, Costa rica, Panama, Trinidad and tobago, Guatemala, Honduras, Jamaica, Antigua and barbuda, Aruba, Belize, Dominica, Grenada, Saint kitts and nevis, Saint lucia, Montserrat, Turks and caicos islands, Barbados, Bangladesh, Bermuda, Brunei darussalam, Bolivia, Egypt, French guiana, Guernsey, Gibraltar, Guadeloupe, Iceland, Jersey, Jordan, Cambodia, Cayman islands, Liechtenstein, Sri lanka, Luxembourg, Monaco, Macao, Martinique, Maldives, Nicaragua, Oman, Pakistan, Paraguay, Reunion, Uruguay.