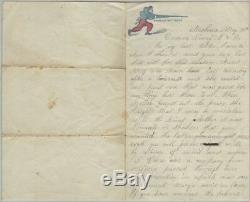 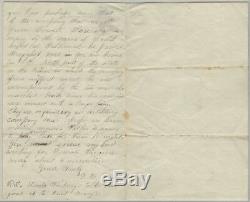 May 10th 1861 Letter Describing the Funeral Procession Home of the First Union Soldier Killed in the Civil War. A letter written on Through Baltimore patriotic stationary featuring a brightly clad Zouave lunging forward with a bayonet.

Dated Nashua, May 10th, G. There was a company from Milford passed through here last Monday, in which was one of Aunt Marys sons in law.

If you have noticed the papers you have perhaps seen that of the company that went from Lowell there was a man by the name of Ladd killed at Baltimore. He passed through here for his home in the North part of the state in the train in which the company from Milford went. He was accompanied by the two men who marched beside him. His remains were covered with a large flag. They are organizing an artillery company here.

People are learning martial music. In April 1861, at age 17, he was one of the initial muster of 75,000 men who answered Presidents Lincolns call for volunteers, enlisting for three months in Co. On April 19, 1861 while the unit of about 240 men was marching from one train station to another through Baltimore they were attacked by an angry pro-Southern mob. It is recorded by some that Luther C. Ladd was the first man to fall, suffering a fractured skull and a bullet wound that severed an artery in his thigh and proved fatal.

Ladd's body was initially buried in the Alexandria Village Cemetery, and was then removed and buried in Lowell. Ladd is often named as the first Union soldier killed in action during the American Civil War (a tragic distinction he shares wth one or two other claimants). Brown later wrote that the Baltimore riot was the final blow that made the Civil War inevitable- "because then was shed the first blood in a conflict between the North and the South; then a step was taken which made compromise or retreat almost impossible; then passions on both sides were aroused which could not be controlled". Folds, minor soil, light wear.

The item "May 10 1861 Letter Homeward Journey of First Union Soldier Killed in Civil War" is in sale since Sunday, March 3, 2019. This item is in the category "Collectibles\Militaria\Civil War (1861-65)\Original Period Items\Correspondence, Mail". The seller is "joslinhall" and is located in Northampton, Massachusetts. This item can be shipped worldwide.