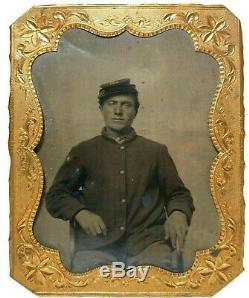 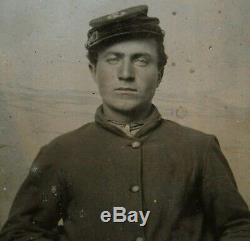 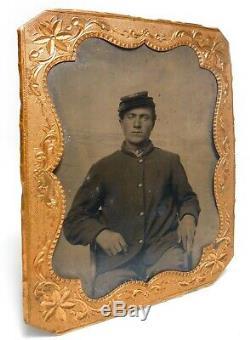 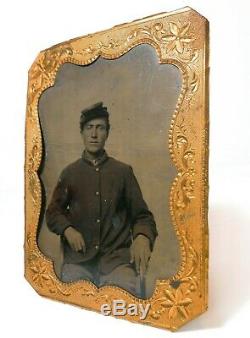 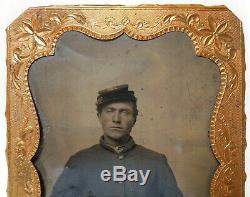 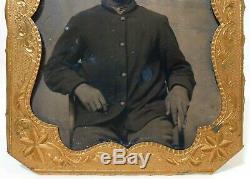 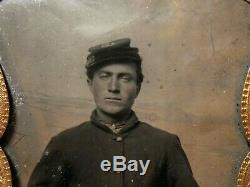 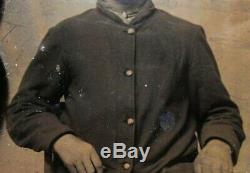 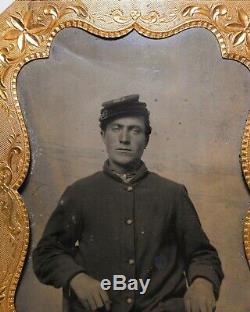 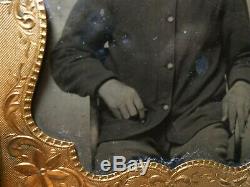 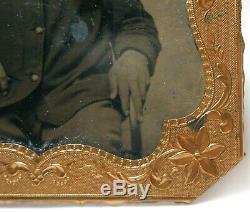 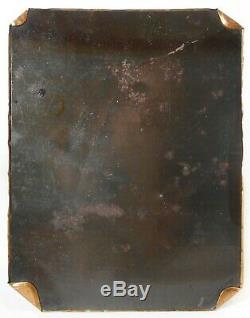 There's a few slight creases and perhaps a minor push into the tin metal surface of this original and antique Ame ri can mid-19th century US Civil War tintype photograph of a posing Union Army soldier seated, with his characteristic Union Army blue wool Kepi cap with short visor and blue wool and brass buttoned sack coat. The enlisted soldier is seated and is posing without his assigned rifle, possibly discharged from service after being wounded or even more likely, photographed before his military service to the nation began and his personal involvement in the struggle against the southern Confederacy, should he perish and die in that struggle.

This photograph then would have been a fairly expensive photographic lifeline to his wife, children and his parents, letting them and future generations view him and his potential ultimate sacrifice for posterity. He's not smiling, as was the 19th century tradition of people posing to have their photo taken. He is serious and stoic, no doubt relaying the seriousness and solemn attitude toward what potentially lied ahead of him and the great unknown.

It has no hinged leather case but has a great, embossed gold liner frame. Good to Very Good overall antique condition.

The item "MID-19TH C ANTIQUE US CIVIL WAR UNION SOLDIER TINTYPE PHOTO WithGOLD FRAME NO CASE" is in sale since Friday, July 24, 2020. This item is in the category "Collectibles\Militaria\Civil War (1861-65)\Original Period Items\Photographs". The seller is "modsanctuary" and is located in Milford, New Hampshire. This item can be shipped worldwide.