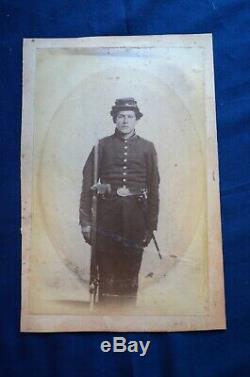 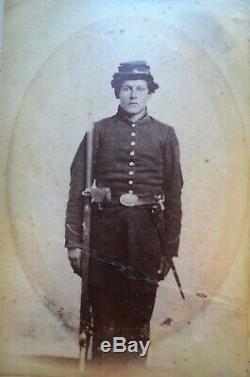 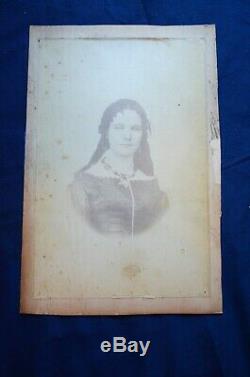 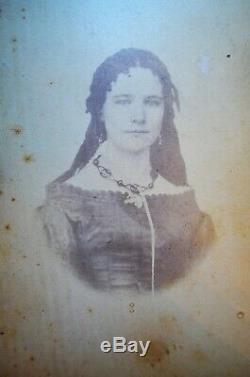 Mysterious Double Sided Civil War Era Photo. Upon looking at this image, one would initially observe it is a large, relatively clear image of a full standing Civil War Solider.

On the reverse, you'd expect to see photographer markings, maybe an inscription of some sort, or at most, nothing at all. Instead there is another photo of a beautiful young lady, mounted in the exact fashion as the soldier. When you start to really look at the piece as a whole, you might find you ask more questions than normal... The question I kept asking was, could both images be of the same person??

Was this soldier a woman?? Or are they brother and sister?

Why are the photos mounted double sided? If you notice the pattern of superficial discoloration, the side with the soldier was clearly mounted in some sort of frame with an oval shaped mat. Even if they were brother and sister, why. Would only one image be viewed?

Taking into account the different angles as well as different expressions, comparing. Facial features side by side I found several similarities. They both have similar jaw lines, lips, eye shape, brows and hair lines. Notice the hair bunched over the soldier's ear on one side, and then above the other ear, as if it is tucked back and under the cap. Both seem to have similar, narrow shoulders. Also, the typical fit of a soldiers coat was snug, but you see several wrinkles as if it is too large.

Lastly, compare the petite build of the soldier against the height of the musket.. There is no concrete information on either person, but I can't help but wonder, was this a woman soldier?? Or simply a gag photo? Oh, the mystery in History...

In very good condition; Both images have light scuffing and blemishing, discoloration and some wrinkling. The edges of the mounting has been trimmed. 5 3/4" x 9" (size of images), overall mounting is 6 1/2" x 10". Please refer to the photos for condition and detail. The item "Mysterious Double Sided Civil War Era Photo.