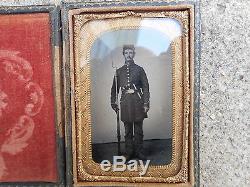 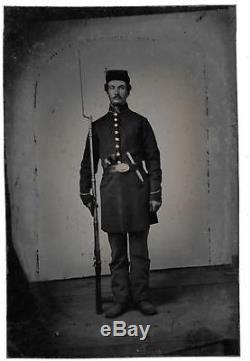 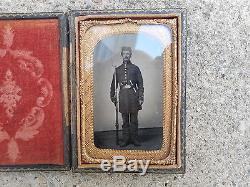 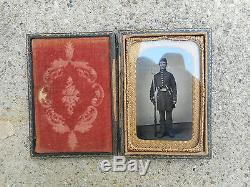 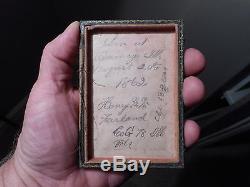 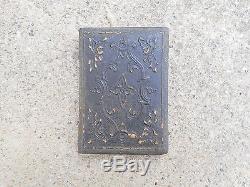 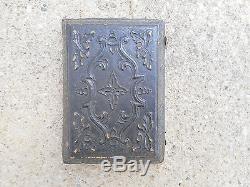 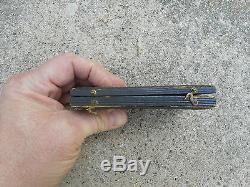 Guaranteed authentic estate acquisition Civil War soldier tintype with soldier holding a musket and appears to have a pistol tucked in his belt and also what looks like a knife, the soldier is identified and written under case as HENRY M. Taken at Quincy, Illinois August 20th, 1862 Co. G, 78th Illinois Vols, Age 18 years... In good condition, the actual tintype measures approx. 2-1/2 x 3-1/2 and is in original pressed cardboard case which is a odd-size that some refer to as a 1/8th Plate.

The image is sharp exhibiting good clarity with the case exhibiting overall surface wear and is detached at hinge, I was also able to acquire two additional Civil War period tintypes of this same man so check back with my other listings for these in the next day or so. According to what I have been able to find Henry M. McFarland participated in several battles during the war and was promoted to Corporal towards the end of the war. Item is 100% guaranteed to be as advertised with no alterations. Here is some information I was able to find ion the soldier, Henry M.

Son of William and Mariah McFarland, was born March 4th 1844 in Adams county, Illinois; enlisted at the age of eighteen in Company G 78th Illinois Infantry, and was a non-commissioned officer for three years of the 2nd Division of the 14th Army Corps, Army of the Cumberland. Was engaged in fourteen hard fought battles and went with Sherman to the sea, on the 4th September 1866 he married Electa Whiteman, a school teacher in Iroquois county in Illinois, he resided in Newton county, Indiana in his later years. From Genealogy of the McFarland Family by Thomas S. Doing that is against U. The item "Nice ID'd Tintype Image of Armed Civil War Soldier with Musket, Knife & Pistol" is in sale since Thursday, May 21, 2015. This item is in the category "Collectibles\Militaria\Civil War (1861-65)\Original Period Items\Photographs". The seller is "zwara1" and is located in Frankfort, Indiana. This item can be shipped to United States, to Canada, to United Kingdom, to Mexico, to Germany, to Japan, BR, to France, to Australia, RU.