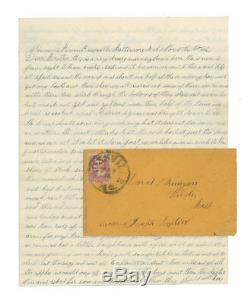 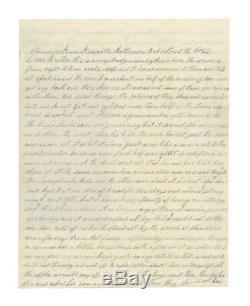 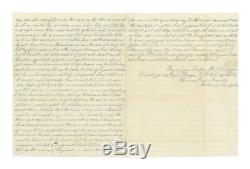 An interesting 1862 letter written by Private Rufus P. Munyan of the 18th Connecticut Infantry, in which he describes the meager rations of bread and stinking meat they subsisted on. They occasionally received fresh beef, but Munyan reported, I have not had but two slices of steak since we came here and one slice was raw and tougher than woodchucks hide and the other was about all burnt up. He also discussed a nearby plantation that fifty men cleaned out of apples, writing they were strong union when they saw fifty bayonets right under thare noses.

A nearby cider mill offered refreshment. Of the owner, Munyan wrote, I think he is a little cecesh but if he is he has got one all thunderin good looking girl and I go thare to warm up and get cider. I went once and had to tap a barrel and the little honey went down cellar with me to hold the lite so I just whispered lov in her ear and what she whispered I shant tell but it suited me first rate.

Dear Brother this is a very dreary morning down here. The snow is from eight to ten inches deep and it has commenced to thaw and it is all splash around the camp and about one half of the company have not got any boots and thare shoes are all worne out some of them are found with thare toes stick through the bottoms of thare shoes and we are in tents and do not get our rations. More than half of the time our bread is cooked up at Harvard grace and brought down to us. The bread should come every morning but it does not for some reason or other.

The meat stinks but the cook boils it just the same and we can eat it or let it alone just as we like. Once in a while the quartermaster sends us sum fresh beef and what is not fried is made into a soap and the devil cant eat it. I have not had but two slices of steak since we came here and one slice was raw and tougher than woodchucks hide and the other was about all burnt up. I hav not had but one slice of bread for two days and when I get any more I cant tell. But I hav a happy faculty of living on nothing so I think I can stand it as long as any of them. I was on guard yesterday and it snowed so fast all day that I could not see the cars tracks off we hav to stand out by the switch at shouldered arms for every train that passes night or day no matter for the snow or rane. We hav a little bough house with a fire in it so when there is no cars passing we can keep quite comfortable in that.

We went out to drill last thursday and went off to a plantation about two miles and got all the apples we could carry off. Two or three of the boys went thare the day before and asked for sum and the folks told them they should not hav any, but when about fifty made thare appearance they told us we could hav all we wanted.

They were strong union when they saw fifty bayonets right under thare noses. And that is the kind of union people we are among. There is a man here that owns the best plantation in town that came from York state. He is a rabbid cecesh and has got two sons in the cecesh army now. I think he is a little cecesh but if he is he has got one all thunderin good looking girl and I go thare to warm up and get cider.

Lieutenant Col Nichols came here last night to see how we were situated. I was the first one that saw him and he asked me how we was getting along. I told him we did not hav nothing to eat and had to sleep under the snow.

When he got off from the cars he asked the station master what the station house was occupied for and he told Nichols that the house was full and he could not hav so much as one room but he told him a ly. The house is as large as Orin Emersons and there is a large l besides and not there is but fore persons in all that liv in the house and there is a lot of rooms that are empty that we might hav as well as not but as I said before the depot master is secesh so that accounts for our being unable to get into the house.

But there is a large house a little ways from here that is empty and I think that we shall take that in the name of the greatand Abe Lincoln for our winter quarters. My boots has not come yet nor the receipt for it neither. But I suppose that it is at fort Mashel? And if it is it will stay untill I send for it. I shall find out if it is thare.

Send me a list of what the things cost each in detail. The snow is going off as fast as it came.

Hav you ever got any papers that I have sent home. And hav you ever sent any to mee. I hav sent for sum two times but hav not seen any yet.

I want the Webster Times. Give my respects to Esquire Echo and Joslin and tell him that I want a Patriot. Munyan Direct yours Rufus P. Munyan Co D 18th regt C.

Stemmers Runn Rossville Baltimore County Md. The letter was written on three pages of a stationery sheet measuring about 7 1/2 x 9 1/2. It is in excellent condition with little toning.