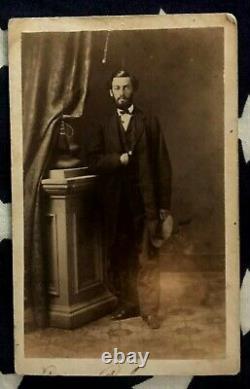 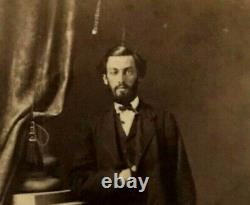 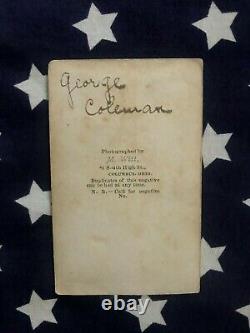 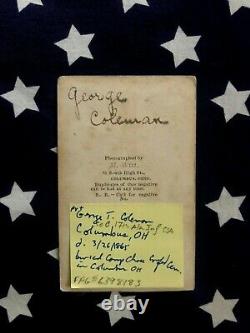 Up for sale is an original Civil War Era CDV of George Coleman of the 20th Ohio Infantry Company A. He mustered in at Camp Chase on November 13th, 1863 as a private. Coleman of the 17th Alabama, as a prisoner at Camp Chase, and would later die and be buried in the Chase cemetery.

I would say the chances are more likely this being the Coleman in the 20th O. With the image being taken before being mustered into the service, than an image that was taken in Columbus while a prisoner there.

Either way, nice full image pose holding his slouch hat. The CDV is in overall good condition with minimal edge and corner wear. Organized for three months service in May, 1861, and for three years, October 21st, under Colonel Charles Whittlesey, it served in Kentucky until February, 1862, when it moved to Fort Donelson and participated in that battle; and at Shiloh, fought in Lew Wallace's Division. In June it garrisoned Bolivar, Tennessee, where it checked the advance of a large Rebel force. In Grant's movements about Vicksburg, the 20th fought at Raymond, Jackson and Champion Hills, and afterward joined the investment.

In January, 1864, the Regiment re-enlisted as veterans and joined the Meridian expedition. In June it joined Sherman in his Atlanta campaign, and in the great battle of July 22nd, was nearly surrounded by a superior force of the enemy, but fought its way out. It marched with Sherman to the sea and through the Carolinas, passed in review at Washington, and was mustered out at Louisville, July 18th, 1865.

The 20th was famous as a fighting Regiment and had gallant material in officers and men. 20th Regiment Infantry (3 Months).

Organized at Columbus, Ohio, April and May, 1861. Mustered in May 23, 1861. Ordered to West Virginia, and attached to Kelly's Command.

Advance on and siege of Corinth, Miss. Guard duty at Pittsburg Landing till June, and at Bolivar, Tenn.

Action at Bolivar August 30. Duty in the District of Jackson till November.

February 22, and duty there till April. Movement on Bruinsburg and turning Grand Gulf April 25-30. Battle of Port Gibson, Miss. Forty Hills and Hankinson's Ferry May 3-4.