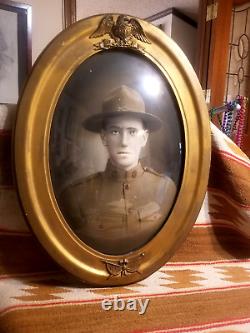 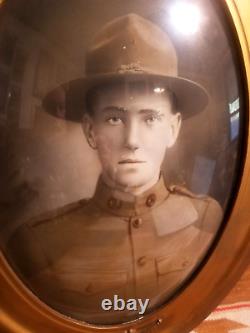 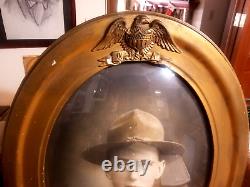 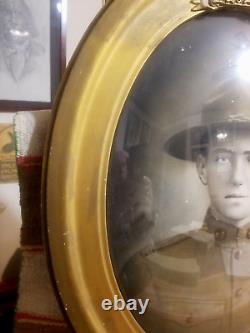 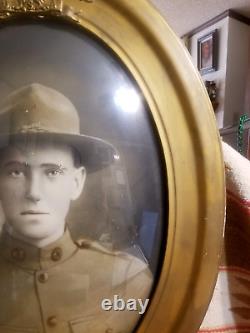 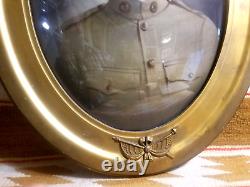 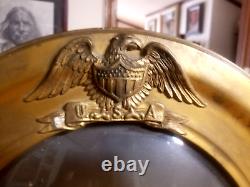 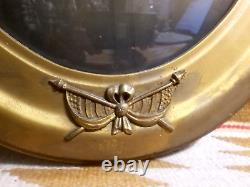 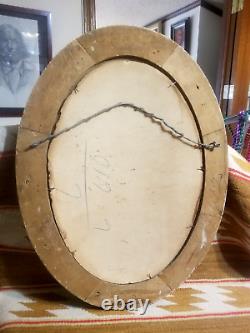 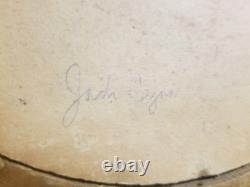 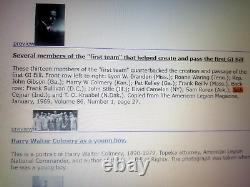 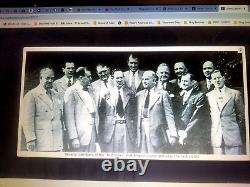 This is an Estate Fresh old 1900's photograph of a Soldier in uniform in a fantastic looking bubble glass oval picture frame. The frame is super cool looking with a Gesso American Spread wing Eagle with Flag Shield in front clutching a Ribbon in its claws with the letters USA in the ribbon banner. At the bottom are a pair of crossed Flags of the old Civil War style, and both gesso pieces are in outstanding original condition as described above. This whole piece is just great looking. On the back cardboard covering of the photo is written " Jack Cejnar " who turns out to be one of the most interesting Indiana residents I have come across in quite a while.

A bit of his history is written below and is worth the read. He fought in France in 1918 at Meuse-Argonne and survived the fierce battles. After coming home he joined the national staff of the American Legion in 1934, starting as Assistant Director of Public Relations, later becoming the Director. During the 1960s he commanded the local Indianapolis Post and edited the Hoosier Legionnaire (1960-64). When Congress passed the Servicemen's Readjustment Act (1944), of which he was part of the "First Team " Jack was the first to call it the G. Blessing on him for that! It's just a great story and a super cool frame and photo. Size of this Frame is. Cejnar (1895 - 1965) (Jack) was born 23 February 1895, in Pilsen, Bohemia Czechoslovakia, the oldest son of Vaclav and Anna (Bartak) Cejnar. The family immigrated to the United States and settled in Scotland, South Dakota. After graduating high school Jack enrolled at Dakota Wesleyan University in Mitchell, South Dakota but did not graduate.

In 1917 he joined the National Guard at Dallas, Texas. His unit was absorbed into the Army and in July 1918 they sailed for France. From September-November, 1918, he saw fierce combat at Meuse-Argonne, France. After the war he enrolled for a year at the University of Edinburgh (Scotland). Upon returning home in 1919 he joined the American Legion, and registered at the University of Nebraska at Lincoln, graduating in 1921.

While in school he started a social organization which eventually became part of Lambda Chi Alpha. In 1923 he married Esther Jones, a Nebraska University classmate, who had worked her way through school. More importantly for him, a stimulating class in journalism launched him on a writing and news-gathering career. Later on while living in Omaha, Jack worked for the Associated Press and then for the International News Service (INS) which in time was absorbed by the United Press.

Over the next quarter-century his work as journalist and photographer took him and his wife to several cities in the Midwest. In 1934 he joined the national staff of the American Legion, starting as Assistant Director of Public Relations, later becoming the Director. When Congress passed the Servicemen's Readjustment Act (1944), Jack was the first to call it the G. In 1967, a heart attack left him with breathing problems complicated by earlier diagnosed emphysema forcing his resignation from all Legion responsibilities the following year. He and his wife moved to San Jose, California in July 1969 to live with Esther's twin sister, Mrs. Esther died in March 1970 and Ruth continued to care for Jack until his death on 28 February 1975.

Jack Cejnar reportedly had a mind capable of total recall. The Hoosier Legionnaire (April 1975), quoting an earlier edition of the Indianapolis Times, described him as nearly attaining the stereotype of a "dashing, press-stopping, bullet-dodging, trenchcoated, brash hero, " in large part because of the "scoops" he managed-scoops regarding Indiana University women wearing bloomers, John Dillinger, Public Enemy No. 1 (almost a face-to-face encounter in Mooresville, IN), a bank robbery (in Clinton, Indiana), and more.

Cejnar's first-on-the-scene arrival at headline- breaking events like murders, bank robberies and deaths baffled competing news services. Using that as leverage, he agreed to provide the insurer with a detailed report of the holdup if the banks would call him before they called the sheriff. My descriptions are solely there to assist buyers finding the items and are not a guaranteed accurate description of the item in all cases. If you do need information I have neglected to include, please don't hesitate to ask any questions.