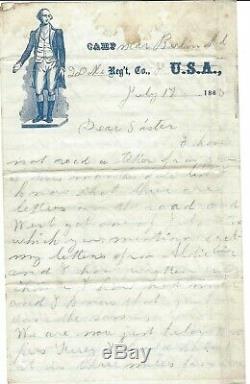 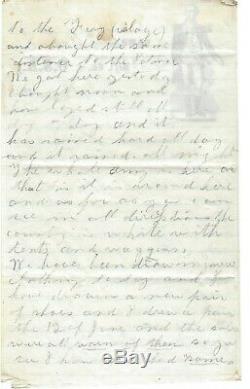 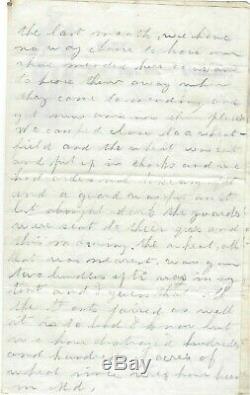 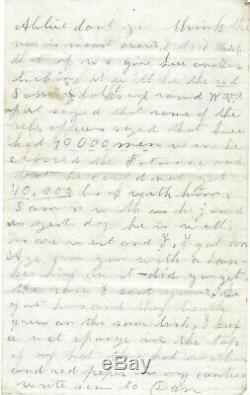 Offering a 4 pp, 4 ¾ x 8, Civil War letter, Camp near Berlin, MD, 20th Maine Regiment, Co. I, July 17, 1863, patriotic stationary, just two weeks after the Battle of Gettysburg in which this regiment played a critical role on Little Round Top hill, helping the Union to achieve its important victory. Our writer, identified only as Dan, sends this letter to his sister. We are now just below Harpers Ferry.

I should think it is three miles from here to the Ferry... And about the same distance to the Potomac.

And have layed still all day today and it has rained hard all day and... The whole Army is here...

And as far as you can see in all directions the county is white with tents and wagons. We have been drawing new clothing today and I have drawn a new pair of shoes and I drew a pair of shoes on the 12 of June and the soles were all worn... We camped close to a wheat field and the wheat was cut and put up...

And we had orders not to take any... And a guard was put on it. But about dark the guards were sent to their quarters and this morning the wheat, all that was nearest, was gone. Two bundles of it was in my tent and I guess all the tents fared as well. It is too bad I know but we have destroyed hundreds and hundreds of acres of wheat since we have been in Md...

I think if we give Lee another licking, it will be the end... Some of the rebel officers said that Lee had 90,000 men when he crossed the Potomac and that he could not get 40,000 back with him... The 20th Maine Volunteer Infantry Regiment was a volunteer regiment of the Union Army during the Civil War, most famous for its defense of Little Round Top at the Battle of Gettysburg. Prior to its notable actions at Gettysburg in July 1863, the regiment was held in reserve at Antietam. On July 2, 1863, the regiment was stationed on Little Round Top hill at the extreme left of the Union line.

When the regiment came under heavy attack from the Confederate 15th and 47th Alabama, the 20th Maine ran low on ammunition after one and a half hours of continuous fighting. It responded to the sight of the rebel infantry forming again for yet another push up the slope at them by suddenly charging downhill with fixed bayonets, surprising and scattering the Confederates, thus ending the attack on the hill.

The 20th and the 83rd PA together captured many men from both Alabama regiments and the 4th and 5th Texas regiments. Later actions in which the regiment participated included Second Rappahannock Station, Mine Run, The Wilderness, Spotsylvania Court House, the Siege of Petersburg, Peebless Farm, Lewis Farm/Quaker Road, White Oak Road, Five Forks and Appomattox Court House. Letter is in pencil, on patriotic stationary, with toning and some staining at the top. Creative spelling corrected in transcription for clarity.

Our goal is to please every customer. The item "Soldier of 20th Maine Civil War Gettysburg Victory Says Lee Almost Finished" is in sale since Tuesday, December 31, 2019. This item is in the category "Collectibles\Militaria\Civil War (1861-65)\Original Period Items\Correspondence, Mail".